Vancouver, British Columbia – January 15, 2015 – Callinex Mines Inc. (the “Company” or “Callinex”) (TSX-V: CNX; OTCQX: CLLXF) is pleased to announce its fully funded 2015 exploration program focusing on its Pine Bay and Flin Flon projects located near Flin Flon, Manitoba. The objectives of the two-phase drilling campaign are to confirm, expand and discover high-grade copper and zinc rich massive sulfide mineralization. The Company has recently compiled and re-evaluated historic data on the Pine Bay and Flin Flon projects in support of its 2015 exploration program. Phase one of the drilling campaign is anticipated to commence within 60 days.

Max Porterfield, President & CEO, stated, “Today’s announcement is a significant milestone towards our renewed focus on discovering and developing economic VMS deposits near Flin Flon. I am excited by the opportunities ahead to advance our projects and provide shareholders with exposure to potential for new discoveries within close proximity to Hudbay’s mining operations.”

The exploration program is well underway with ongoing interpretation of existing geological and geophysical data and plans for additional ground geophysics on prospective targets. Phase one of the drilling campaign consists of approximately 2,000m and will be focused on expanding high-grade mineralization at Pine Bay.

The second phase of exploration is planned to commence this summer and will include additional geophysics and approximately 2,000m of drilling with an objective to follow up on initial results and test additional prospective geophysical targets hosted within favorable geology.

The Pine Bay Project is located 16km east of Hudbay’s 777 Mine and hosts four high-grade VMS deposits. The project is at an advanced permitting stage and includes a 212m vertical shaft with 760m of underground workings nearby historic resources. Previous operators reported historic resource estimates totaling 1.62 million tons at a grade of 2.81% copper equivalent(1). This is a historic estimate and has not been verified by the Company and should not be relied upon. 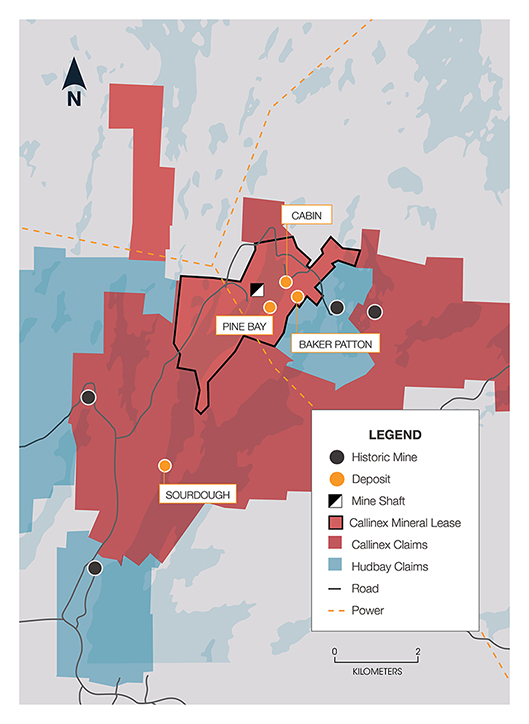 The Pine Bay Project is located 16km east of Flin Flon, MB, and covers approximately 4,500ha. The project includes a mineral lease that allows for the right to operate a mine and covers a 212m vertical shaft with 760m of underground development accessing high-grade copper mineralization. In addition to the right to operate a mine, the project hosts four past producing VMS mines and historic resources totaling 1.62 million tons at a grade of 2.81% Cu Eq.(1).

The property consists of recently consolidated land package with individual claim blocks previously owned or operated by Placer Dome, Newmont, Hudbay and Cameco. In the 1990’s, the northern section of the property was primarily explored by Placer Dome, who conceptualized potential for a large VMS deposit at depth near the Pine Bay, Cabin and Baker Patton deposits. The Baker Patton deposit, which may represent a feeder zone, is located within a large and intensely altered zone up to 1,500m long and up to 740m wide. This alteration zone overlies a 540m x 360m stringer zone, a large gravity anomaly and both electromagnetic (EM) and magnetic anomalies.

The technical content of this news release has been reviewed and approved by Gilles Dessureau, MSc., P.Geo, a Consultant to the Company and a Qualified Person as defined by National Instrument 43-101.