Vancouver, British Columbia – March 10, 2022 – Callinex Mines Inc. (the “Company” or “Callinex”) (TSXV: CNX) (OTCQX: CLLXF) is pleased to announce additional 2022 exploration targets at the Company’s 100% owned Pine Bay Project, located 16km away from processing facilities in the Flin Flon Mining District of Manitoba. The Company has identified a number of high priority targets from vectoring completed during the 2021 exploration campaign along the interpreted growth fault corridor that hosts the emerging high-grade copper, gold, silver and zinc Rainbow deposit (“Rainbow”) and five other deposits, three of which have seen some level of historic production.

In Q4 2021 the Company began exploring within the growth fault corridor by drill testing a number of priority surface pulse electromagnetic (“SPEM”) and airborne versatile time domain electromagnetic (“VTEM”) targets that off-set a regional formational conductor.  It should be noted that the Rainbow Deposit, which was discovered in 2020, flanks a separate formational conductor located to the east (Pine Bay Plan View with VTEM and Borehole EM Anomalies). 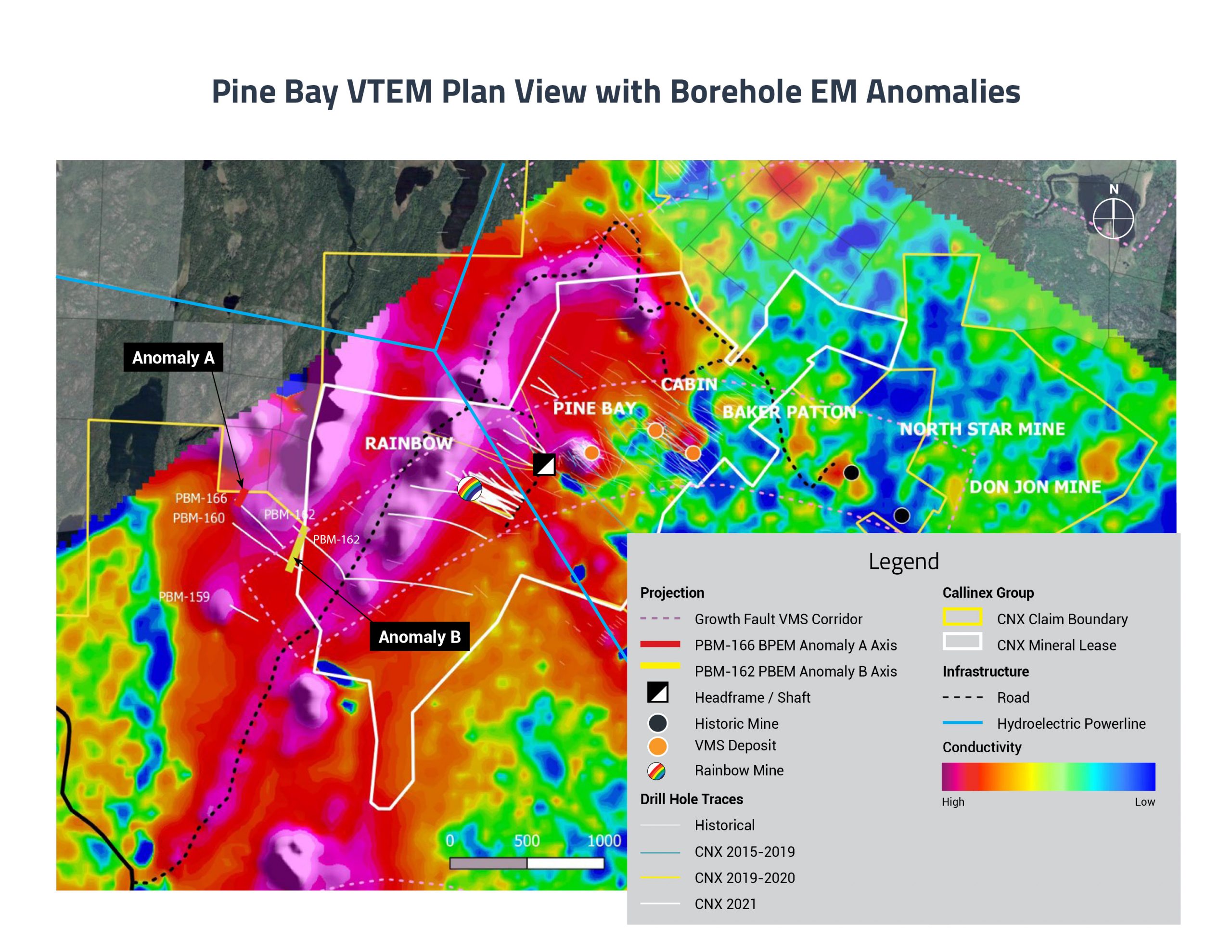 Max Porterfield, President and CEO, stated, “These exciting targets sit at the base of the interpreted growth fault that hosts Rainbow and five other deposits to the east. Similarly, the Flin Flon deposit sits in proximity to Millrock Hill, a well known outcropping at the base of the growth fault that hosts it as well as the Callinan and 777 deposits.  We are eager to immediately test the targets announced today in addition to the high priority targets recently identified by regional IP and EM surveys in an upcoming drilling campaign.” 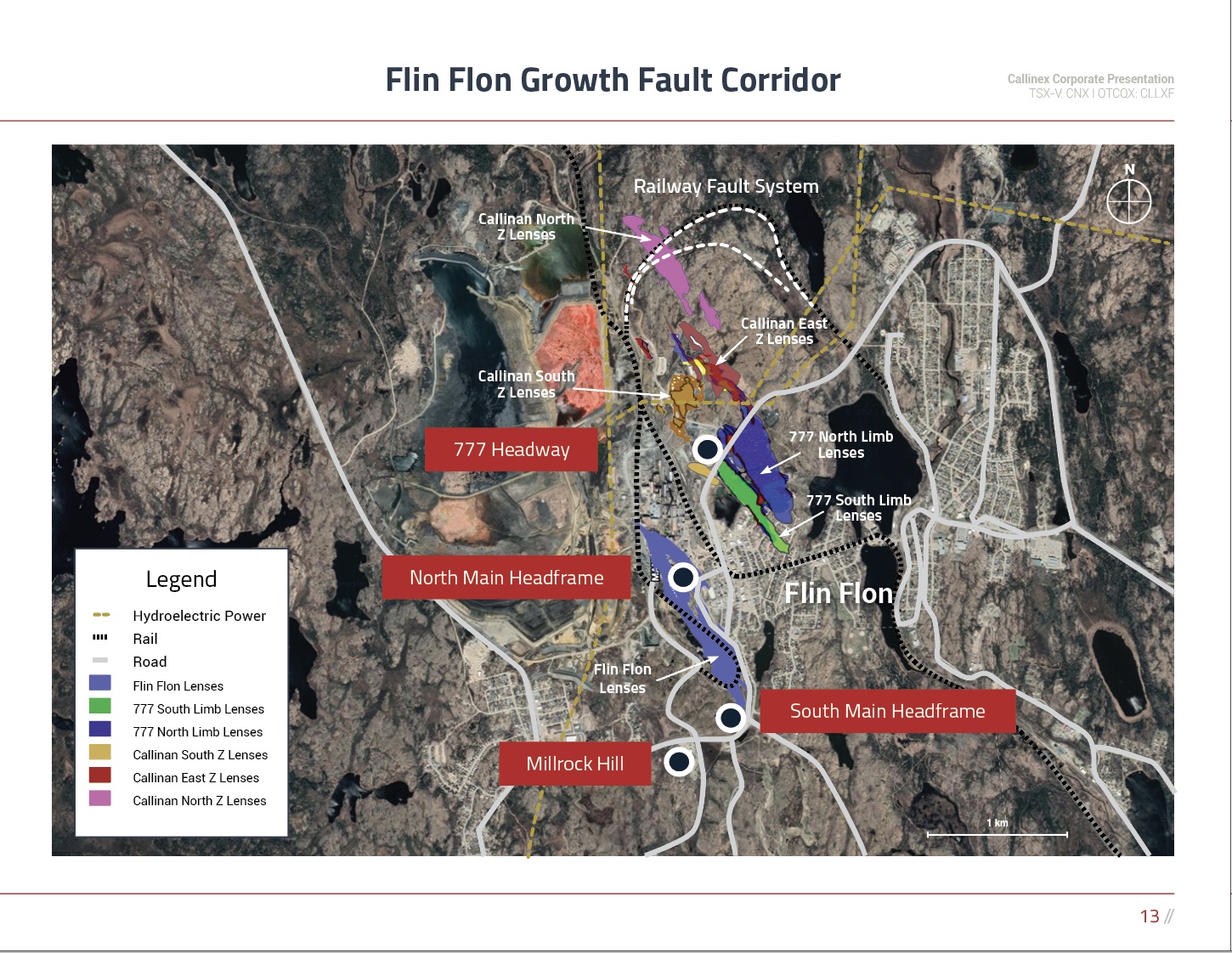 Callinex focused on drilling targets that are proximal to the Pine Root River Millrock area that is interpreted to be the base of the growth fault corridor that hosts the Rainbow, Pine Bay, Cabin, Baker Patton, North Star and Don Jon VMS deposits that sit to the east (Plan View with Drill Traces and Mapped Millrock). Millrock is a term used to refer to talus breccia that occurs along major growth faults controlling volcanogenic massive sulphide (“VMS”) deposits. The Pine Root River Millrock area at Pine Bay is analogous to the Millrock Hill in Flin Flon (Examples of Millrock Hill and Pine Root Millrock). Millrock Hill is a well known outcrop that sits immediately to the south of the 62 million ton Flin Flon Deposit that kick started the Flin Flon Mining District which has hosted 32 mines (Flin Flon Growth Fault Corridor Plan View). 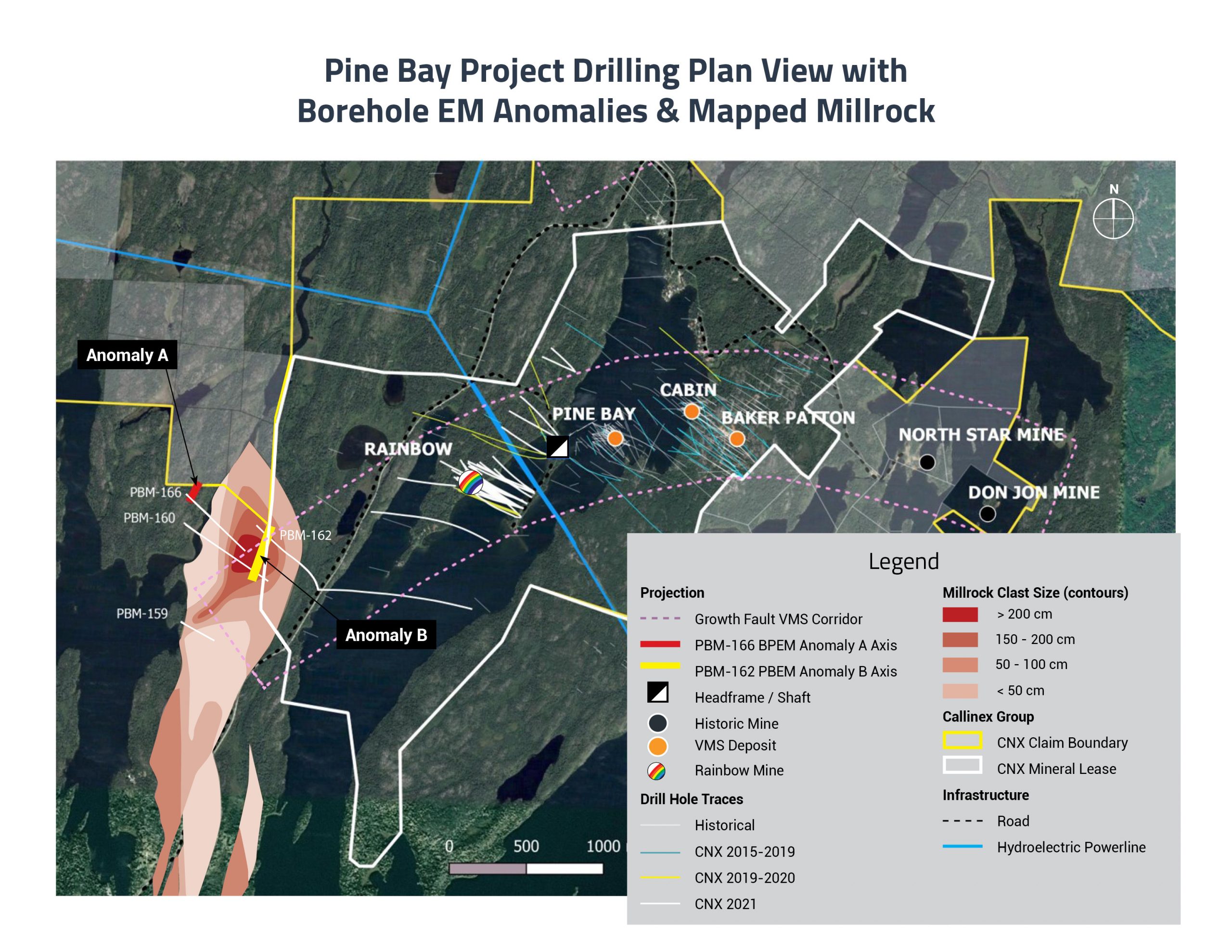 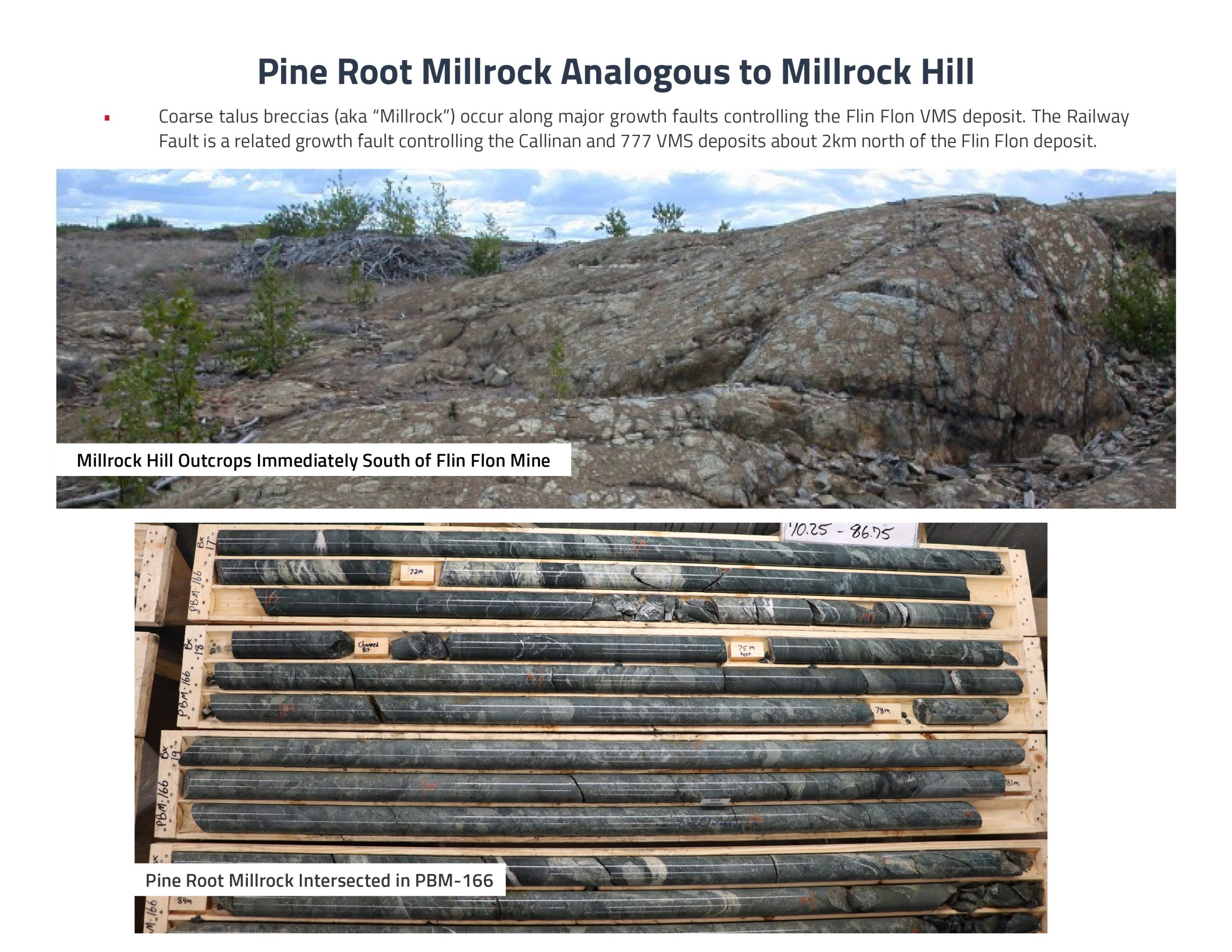 JJ O’Donnell, Callinex Exploration Manager, stated, “With over 40,000 meters of drilling completed since the Rainbow discovery on the Pine Bay project, our gained knowledge and understanding of the overall  controls has given us the confidence that the 2,000 hectare Pine Bay Project will deliver additional positive results. Further testing of the favorable geology, mineralization, and alteration noted in drill hole PBM-166 may generate a new VMS system for the Pine Bay Project.”

The geology intersected by drill holes PBM-160 and PBM-166 is indicative of a possible repeat of the rock package that hosts the Rainbow deposit, and warrants immediate follow-up drilling in 2022. Both holes were drilled approximately 240m apart and collared into millrock (Plan View with Mapped Millrock and Borehole EM Anomalies). Most interesting, as the holes proceeded westerly the geology consists of very favorable felsic volcanic sequences which could be the fold repeat of the Rainbow horizon that hosts the Rainbow. Drill hole PBM-166 intersected 1.5 meters of massive sulphides with elevated copper, zinc gold and silver. Additionally, the mineralization is hosted within a chlorite altered brecciated felsic volcanic unit which makes this a very high priority target area.

Alan Vowles, member of Callinex’s technical team, added, “In the case of the off-hole anomaly in PBM-166 with an extremely high CT, greater than 4000 siemens, indicates strongly that the target must have both high conductivity and significant thickness.”

A borehole pulse electromagnetic (“BPEM”) survey completed in drill hole PBM-166 identified Anomaly A, a highly conductive 130m by 400m anomaly possessing a conductivity thickness (“CT”) of 4028 siemens (See 3D View with Drill Traces and Anomaly A). The formational conductor that flanks Anomaly A is made up of mineralized siltstone and has a CT of 2462 siemens. Anomaly A sits off-hole of the base and precious metal  bearing massive sulphides intersected in drill hole PBM-166. 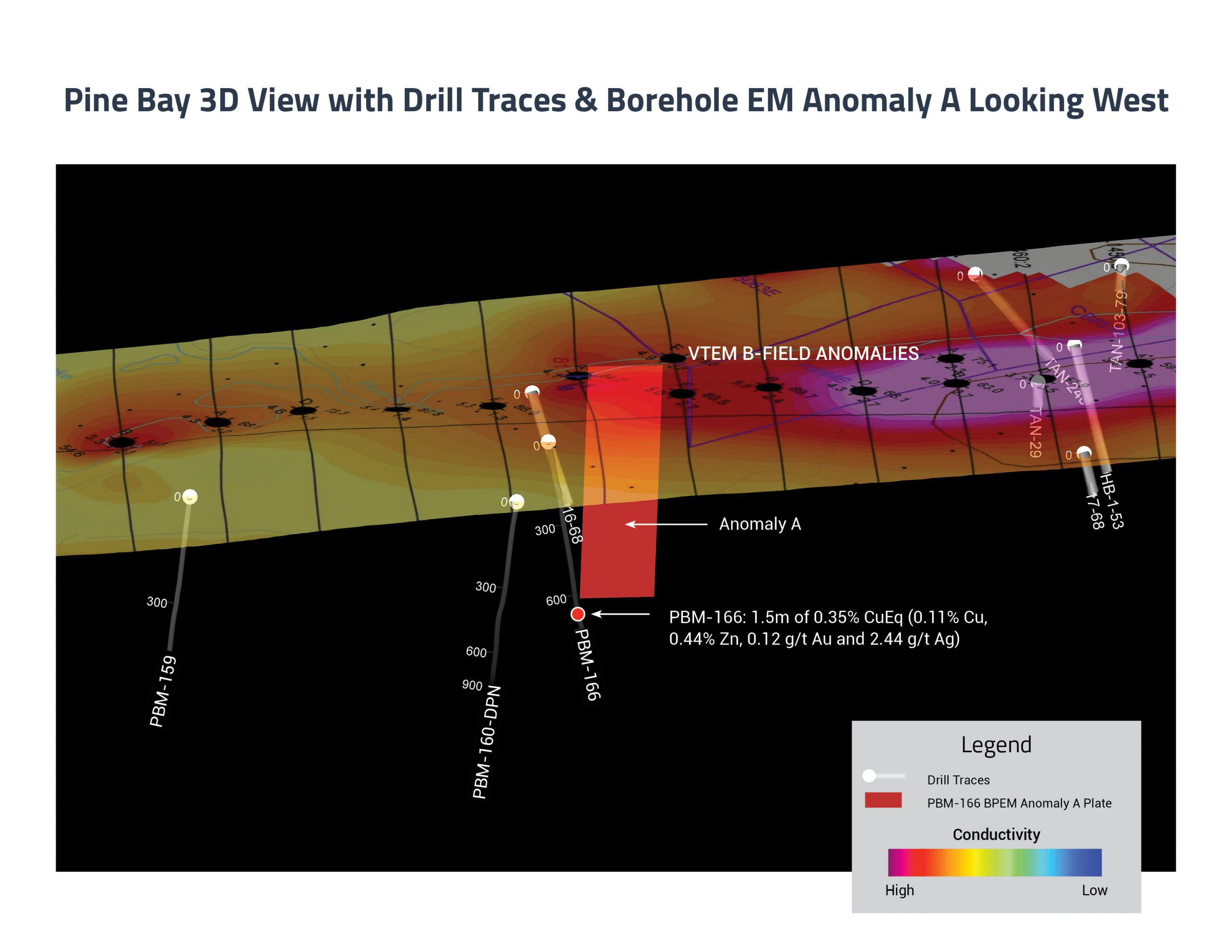 Drill hole PBM-162 also collared into the millrock followed by a favorable package of felsic volcanic rocks before being shut down in an intrusive gabbro unit. A follow-up BPEM survey completed on PBM-162 identified Anomaly B, a large 600m by 400m off-hole anomaly that sits within the center of the mapped Pine Root millrock. PBM-162 was later deepened but failed to intersect Anomaly B. A shallow hole is being planned to follow-up and drill test this target area near the surface.

The Company plans to continue to delineate Rainbow within the first 1km of surface in anticipation of publishing a maiden resource later this year. Since the Company discovered the Rainbow Deposit in August 2020, the Company has drilled 71 holes (including 15 wedges) for a total of 40,000m into the deposit area.

Callinex’s Pine Bay Project encompasses the majority of the Baker Patton Complex (BPC), the largest exposed felsic (rhyolitic) volcanic accumulation in the Flin Flon portion of the Flin Flon-Snow Lake Greenstone Belt (Flin Flon Greenstone Belt Regional Geology) . This is especially important since the majority of the VMS deposits occurring within the Flin Flon Belt of Saskatchewan and Manitoba are almost always hosted by rhyolitic flows and volcaniclastic rocks within predominantly mafic terranes. Of additional importance is that these felsic (rhyolitic) rocks only account for a small portion of the total volcanic pile (5-10%). Of particular exploration interest to Callinex’s Pine Bay Project, is the very large exposure of intensely altered (chloritic, sericitic and silicic alteration) felsic rocks that have collectively been called the Baker Patton Alteration Zone, encompassing an area with a minimum of a 700m by 1000m footprint. A very large footwall alteration system such as this would normally be expected to be accompanied by a large VMS system and has consequently been the target of many exploration companies preceding Callinex. 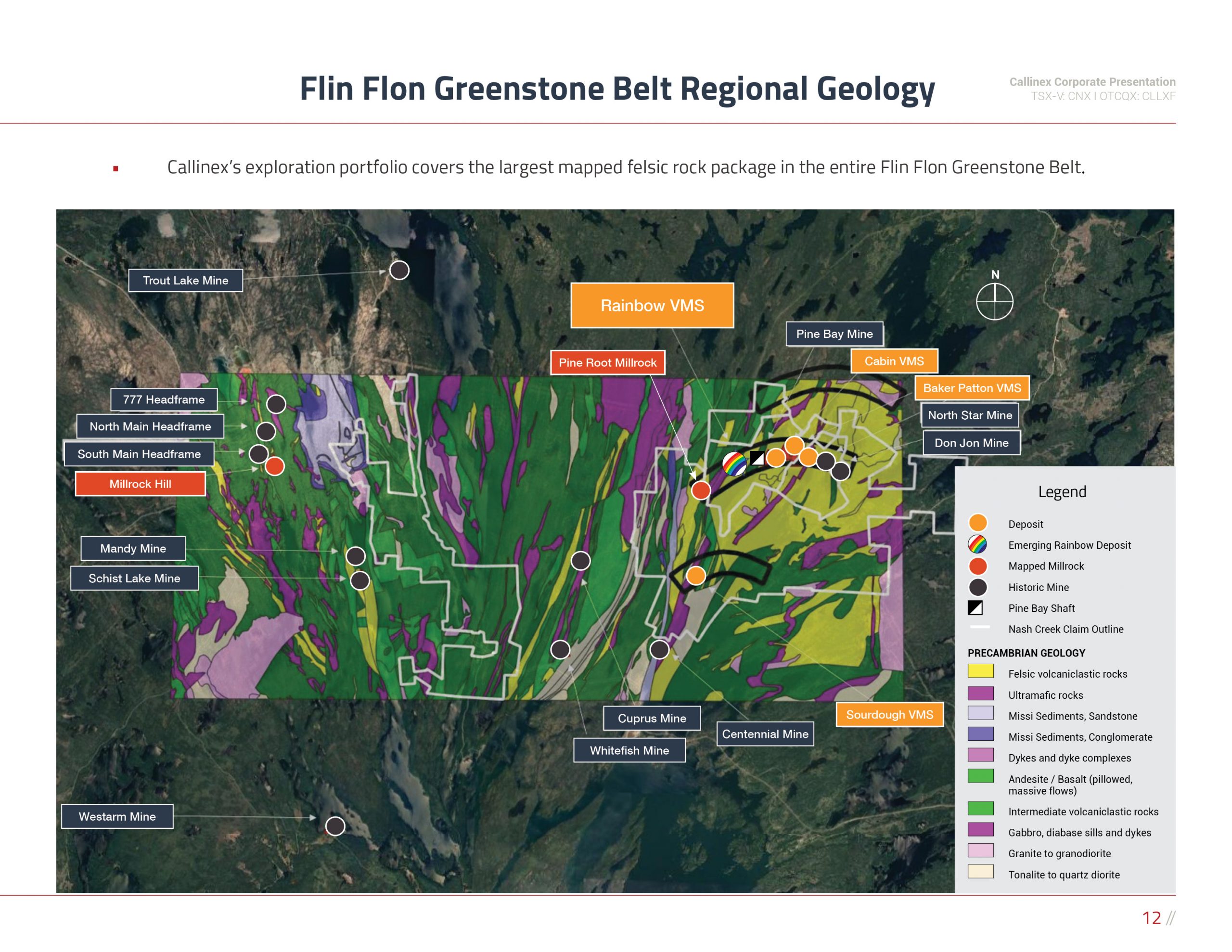