Vancouver, British Columbia – September 7, 2022 – Callinex Mines Inc. (the “Company” or “Callinex”) (TSXV: CNX) (OTCQX: CLLXF) is pleased to announce it has discovered the Alchemist deposit (“Alchemist”), a new high-grade copper, zinc, gold and silver bearing Volcanogenic Massive Sulphide (“VMS”) deposit at the Company’s 100% owned Pine Bay Project, located 16km away from Flin Flon, MB. The Alchemist sits at the base of the interpreted growth fault corridor that hosts six other deposits including the emerging high-grade copper, gold, silver and zinc Rainbow deposit which is located 1,420 meters to the east (Pine Bay Plan View with Alchemist Deposit).

Max Porterfield, President and CEO, stated, “We are thrilled with the initial results from the Alchemist, the newest discovery at our Pine Bay Project. The Alchemist deposit comes with the potential for significant resource growth for the Company, its shareholders and the community of Flin Flon.” Mr. Porterfield continued, “It’s noteworthy that, to date, each deposit discovered along the growth fault corridor at Pine Bay is significantly larger than the one that precedes it in proximity to Millrock Mountain. Similarly, the Flin Flon deposit sits in proximity to Millrock Hill, a well known outcropping at the base of the growth fault that also hosts the Callinan and 777 deposits in the town of Flin Flon.” 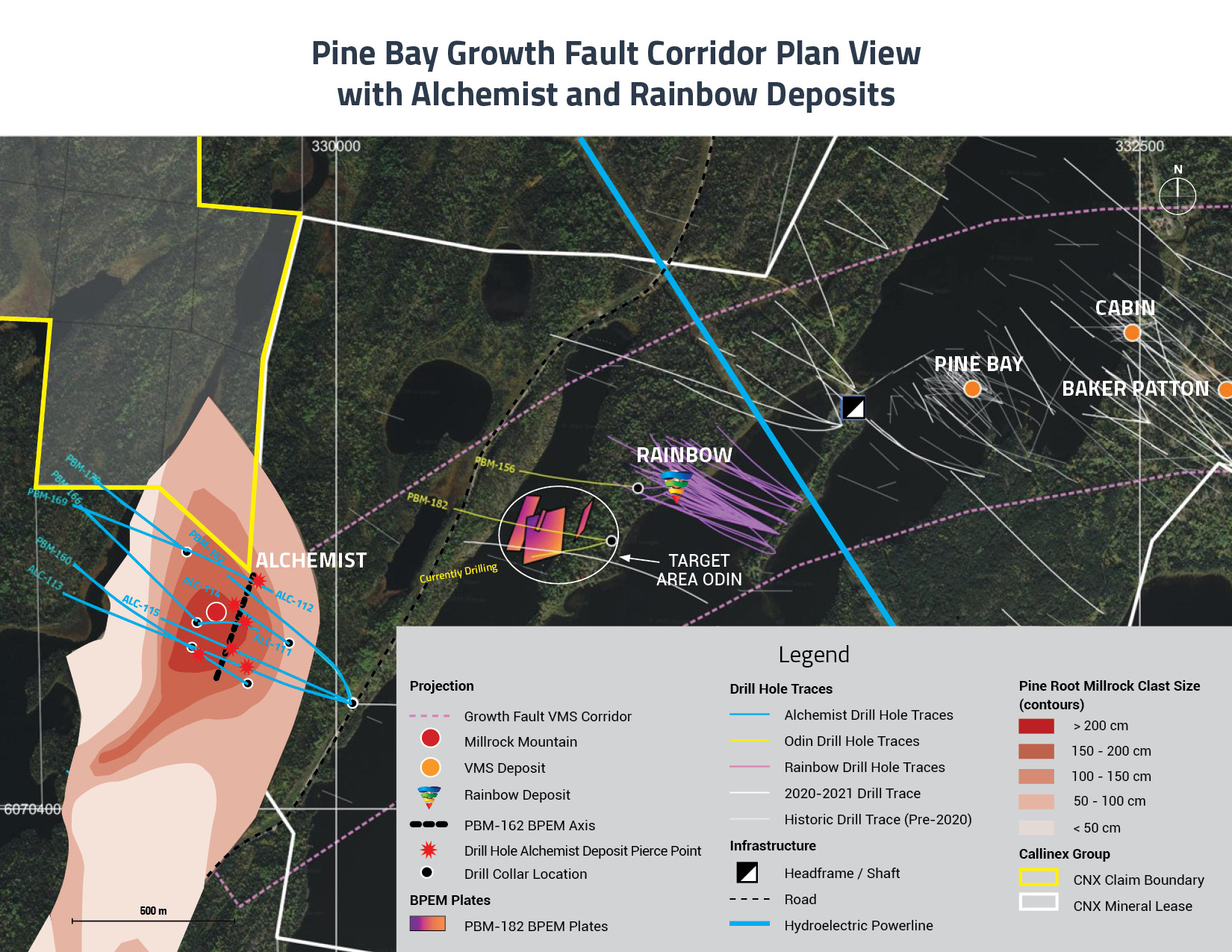 JJ O’Donnell, Callinex Exploration Manager, stated, “The Alchemist discovery supports the newly proposed VMS system which has evolved since the discovery of the Rainbow deposit in August, 2020. The new discovery is proof of concept that the property has the potential to host multiple new discoveries, and future exploration will be exciting for Callinex shareholders.”

Jim Pickell, member of Callinex’s technical team, opined, “It is encouraging to note many of the same strong geological, geochemical and geophysical patterns noted in the upper portions of the Rainbow VMS deposit also occur within the upper parts of the newly discovered Alchemist and Odin exploration target areas. If these same patterns hold true at depth in the Alchemist and Odin areas, it seems logical to assume analogous, thick, high-grade copper intersections could also be found at depth below each of them, as in the Rainbow area.” 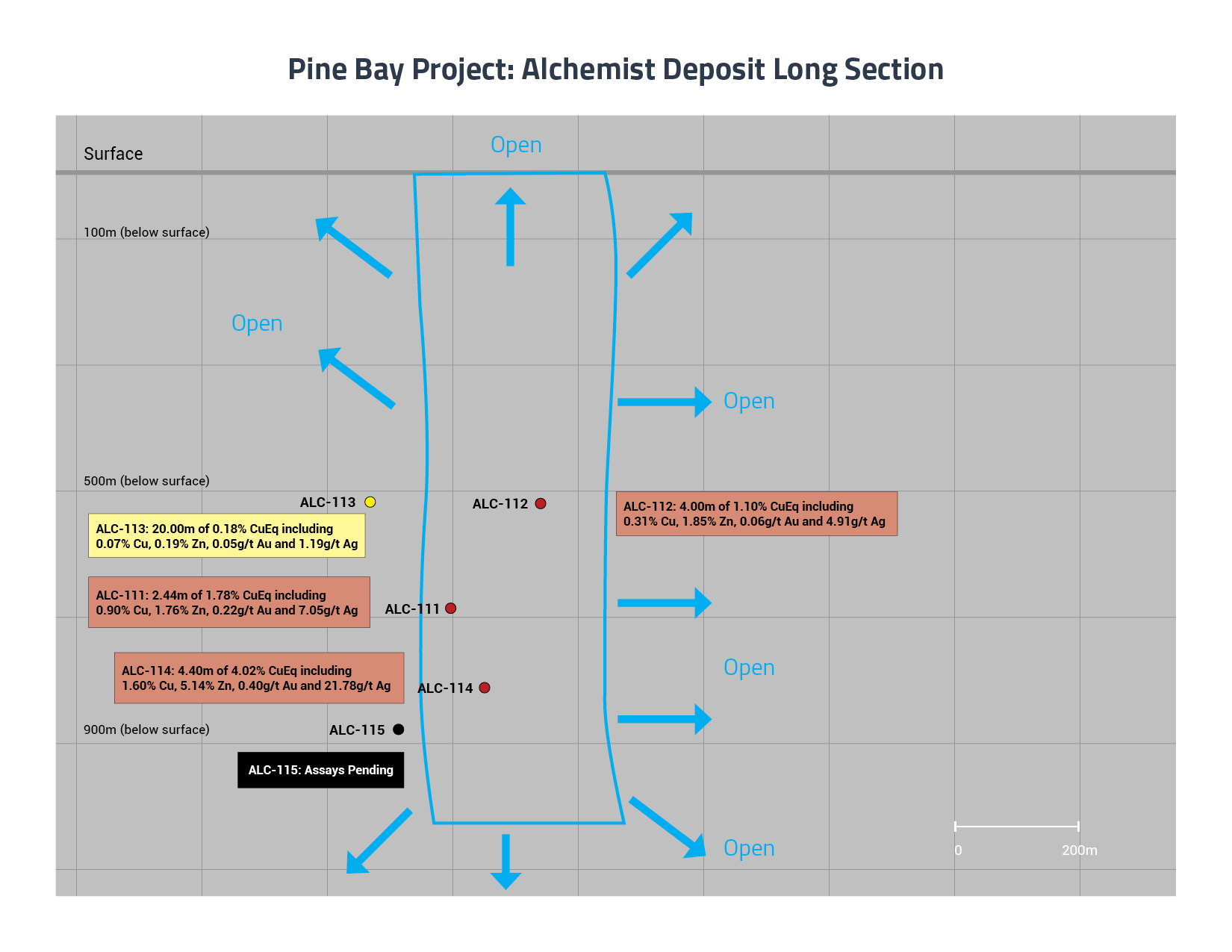 The Alchemist shows a strike of at least 140m between intersections to date, currently defined to an extent of 500-800m below surface and open above, below and northerly. By comparison, the Rainbow’s Orange zone has a strike of 140m. It should be noted that deposits in the Flin Flon Greenstone Belt, like Rainbow, typically have a plunge extent on average between 5-8 times the strike of the deposit.

The representative geology of Alchemist is dominated by felsic volcanic assemblages: including agglomerate (Millrock Mountain), lappili, and tuffaceous sediments, felsic flows (locally brecciated and quartz phyric), local quartz +/- feldspar intrusives and diorites. Numerous sulphide horizons (2) have been intersected prior to and after the Alchemist which exhibit elevated base metal values, zinc and copper (up to 0.3%), which may suggest additional horizons may be present. Additionally, all larger producing VMS mines are made up of a number of stacked zones or lenses such as the Orange and Yellow zones discovered to date at the Rainbow that sit along these horizons.

Callinex focused on drilling targets that are proximal to Millrock Mountain, the area that is interpreted to be the base of the growth fault corridor that hosts the Rainbow, Pine Bay, Cabin, Baker Patton, North Star and Don Jon VMS deposits that sit to the east. Millrock is a term used to refer to talus breccia that occurs along major growth faults controlling volcanogenic massive sulphide (“VMS”) deposits.

Millrock Mountain at Pine Bay is analogous to the Millrock Hill in Flin Flon (Examples of Millrock Hill and Pine Root Millrock). Millrock Hill is a well known outcrop that sits immediately to the south of the 62 million ton Flin Flon Deposit that kick started the Flin Flon Mining District which has hosted 32 mines (Flin Flon Growth Fault Corridor Plan View).  Similarly, the Alchemist sits immediately to the east of Millrock Mountain and is the most proximal discovery made to date within the interpreted main controlling growth fault that the Pine Bay Project area encompasses.

While assays and geochemical results were pending for the Alchemist, Callinex immediately focused on the high priority Target Area Odin (“Odin”). Odin is located directly in between the Alchemist and Rainbow deposits where the growth fault corridor intersects the Centennial Mine Horizon, which hosts the Sourdough deposit and past producing Centennial mine further to the south. Drill hole PBM-182, a hole drilled to test a previously identified BPEM anomaly from drill hole PBM-117 coincident with a chargeability isoshell, intersected a favorable rock package made of up dominantly altered Felsic tuff/ flows, with alteration (chlorite/sericite) normally seen with the Rainbow Zone  A subsequent BPEM survey of PBM-182 identified a highly-conductive anomaly off-hole and located on the Centennial Mine Horizon that has been interpreted to be 150m by 400m, which is similar in dimension as the Rainbow deposit.  Currently, a hole is underway to test the source of this conductive body that represents the Odin target.

Alan Vowles, member of Callinex’s technical team stated, “The modeled plates from drill holes PBM-117 and 182 do not exhibit shapes and dimensions that are characteristic of volcanic sedimentary formations but rather indicate shapes and dimensions more typical of VMS deposit lenses in the Flin Flon Snow Lake Greenstone belt.”

Additionally, the Company has almost completed the necessary drill holes required to delineate Rainbow within the first 800m of surface in anticipation of publishing a maiden resource. Since the Company discovered the Rainbow Deposit in August 2020, the Company has drilled 79 holes (including 17 wedges) for a total of 41,500m into the deposit area. Once the Company receives all assays related to the Rainbow drilling modeling of the Rainbow resource will be finalized.

Callinex’s Pine Bay Project encompasses the majority of the Baker Patton Complex (BPC), the largest exposed felsic (rhyolitic) volcanic accumulation in the Flin Flon portion of the Flin Flon-Snow Lake Greenstone Belt (Flin Flon Greenstone Belt Regional Geology). This is especially important since the majority of the VMS deposits occurring within the Flin Flon Belt of Saskatchewan and Manitoba are almost always hosted by rhyolitic flows and volcaniclastic rocks within predominantly mafic terranes. Of additional importance is that these felsic (rhyolitic) rocks only account for a small portion of the total volcanic pile (5-10%). Of particular exploration interest to Callinex’s Pine Bay Project, is the very large exposure of intensely altered (chloritic, sericitic and silicic alteration) felsic rocks that have collectively been called the Baker Patton Alteration Zone, encompassing an area with a minimum of a 700m by 1000m footprint. A very large footwall alteration system such as this would normally be expected to be accompanied by a large VMS system and has consequently been the target of many exploration companies preceding Callinex.

1.True width estimates are unknown and will be determined with more drilling.

Some statements in this news release contain forward-looking information. These statements include, but are not limited to, statements with respect to future expenditures. These statements address future events and conditions and, as such, involve known and unknown risks, uncertainties and other factors which may cause the actual results, performance or achievements to be materially different from any future results, performance or achievements expressed or implied by the statements. Such factors include, among others, the ability to complete the proposed drill program and the timing and amount of expenditures.  Mineralization on nearby properties is not necessarily indicative of mineralization on Callinex’s properties.  Except as required under applicable securities laws, Callinex does not assume the obligation to update any forward-looking statement.