Vancouver, British Columbia – August 21, 2017 – Callinex Mines Inc. (the “Company” or “Callinex”) (TSX-V: CNX; OTCQX: CLLXF) is pleased to announce that it has significantly expanded its Nash Creek Project land package located in the Bathurst Mining District of New Brunswick (See Figure 1). The new claims, which span 36 sq. km, were staked to cover a trend of high-grade base metal occurrences to the south of the Nash Creek Deposit within an underexplored volcanogenic massive sulphide (“VMS”) belt. This sizeable land package has potential to host additional zinc-rich VMS deposits over a 20 km trend, of which only 2 km has been subject to any significant exploration which is related to the known Nash Creek Deposit. The Nash Creek Deposit is open for expansion along strike in both directions and is being aggressively advanced towards a maiden Preliminary Economic Assessment.

Max Porterfield, President and CEO, stated, “We look forward to aggressively advancing our sizeable resource base in New Brunswick and developing a project portfolio that is viable at current zinc prices. This larger land package ensures that Callinex controls a prospective VMS district with potential for new deposits to be discovered.”

The Project is ideally situated approximately 1 km south of Provincial Highway 11 and has access to power supplied by a nearby 450 MW power station. Additionally, the Project is located 100 km by road to Trevali’s Caribou Mine and 25 km by road to a deep water port along with Glencore’s Belledune lead/silver smelter, which has direct railway access to Glencore’s Canadian zinc smelting and refining operations.

Callinex recently announced the discovery of mineralization 350m to the north of the Nash Creek Deposit where drill hole NC17-224 intersected 9.0m of 5.2% Zn Eq. including 2.4m of 12.6% Zn Eq. at a starting depth of 11m (See News Release dated July 13, 2017). The Company anticipates additional drill results from the Nash Creek Project to be released within 15 days.

The larger Nash Creek land package occurs within the Chaleur Bay Synclinorium that largely consists of Devonian-aged bimodal felsic and mafic rocks of the Dalhousie Group along with intercalated marine sedimentary rocks. The Chaleur Bay Synclinorium has not been extensively explored for base metal deposits and the largest known deposit within this rock package is the the Nash Creek Deposit. Typically, VMS deposits occur in clusters suggesting that these high-grade occurrences to the south of the known deposit, and within the same geological environment, are high-priority exploration opportunities.

The geology of this expanded land package compares favorably to the Nash Creek Deposit where the initial discovery was made by stream sediment sampling. The mineralization is related to high-grade sphalerite and galena breccia veins, which likely feeds stratiform mineralization within breccia zones at the mafic and felsic contact.

Previously, limited exploration on the southernmost 15 km of the land package that was completed by Falconbridge, Noranda and BHP has indicated potential to host additional base metals deposits. Highlights of mineral occurrences include:

Historic trenching exposed at least eight, quartz-ankerite veins that cut Devonian aged mafic volcanic rocks. Considerable trenching is reported to have occurred during the 1930s with assays as high as 10.9% Pb and 8.1% Zn. Five holes were drilled in the 1960s and are reported to have intersected minor mineralization in quartz veins and breccia zones.

Several high-grade outcrops were documented as part of a Department of Natural Resources and Environment (DNRE) study on the potential of these volcanic rocks in 1987 with samples including:

Noranda Exploration Ltd. staked the area based on anomalous stream sediments and the first trench completed encountered 2.7m of 2.1% Cu, 0.6% Pb and 14.7 g/t Ag in 1968. Three holes were drilled in the immediate area and intersected a low-grade Cu-Zn-Pb-Ag zone with the best intersection including 6m of 1.5% Zn and 0.6% Pb with a higher grade interval over 1.5m of 3.1% Zn and 0.6% Pb. Subsequently, BHP revisited the area and collected eight samples from the historic Noranda trenches, six of which were assayed above 0.8% Cu including one sample that assayed at 5.5% Cu, 0.7% Zn, 0.6% Pb and 14.1 g/t Ag.

Approximately 2 km to the northeast, a vein containing massive galena and sphalerite that cuts mafic flows of Devonian volcanic rocks, was discovered in 1987 and reported to contain 3.5% Zn, 2.5% Pb and 1,500 g/t Ag. The rocks in this area are locally brecciated, which is important for permeability associated with VMS deposits. Additionally, there are pyroclastics related to a circular structure that could represent a volcanic crater or vent.

An area with highly anomalous Zn-Pb stream sediment samples ranging from 0.68% to 0.80% Zn, 0.10% to 0.12% Pb and 5-7 g/t Ag. A study completed by the DNRE concluded that in part that the rhyolites in the area contained a trace element (Hg-Sb-As) signature, which is similar to that of the Nash Creek Deposit.

Exploration in search of epithermal gold and silver deposits by Novagold in 1988 intersected elevated Zn-Pb zones over widths ranging from 5 to 10m. The highest grade intersection from the gold-focused drilling campaign was 2.2% Zn, 1.1% Pb and 17 g/t Ag over a 0.2m interval in drill hole 03-88-1. A HLEM geophysical survey subsequently completed identified a conductive zone with potential for flat-lying mineralization to the northeast and was concluded by Novagold to represent a viable drill target for base metal mineralization.

The Company is also pleased to announce that it has granted options to purchase 100,000 common shares to its recently appointed Chief Financial Officer.  The options are exercisable at a price of $0.32 per share for a period of five years from the grant date and are subject to certain vesting provisions. 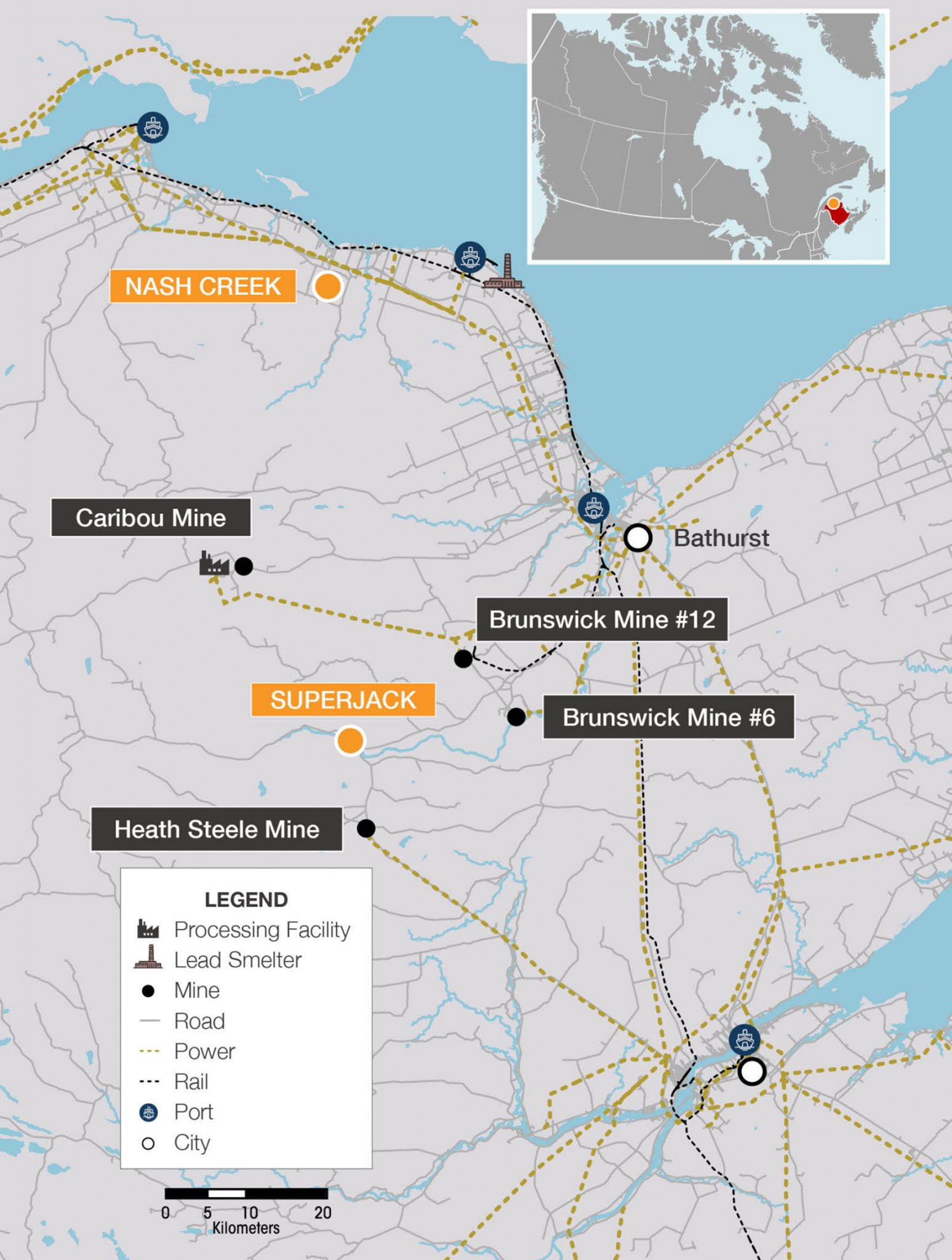 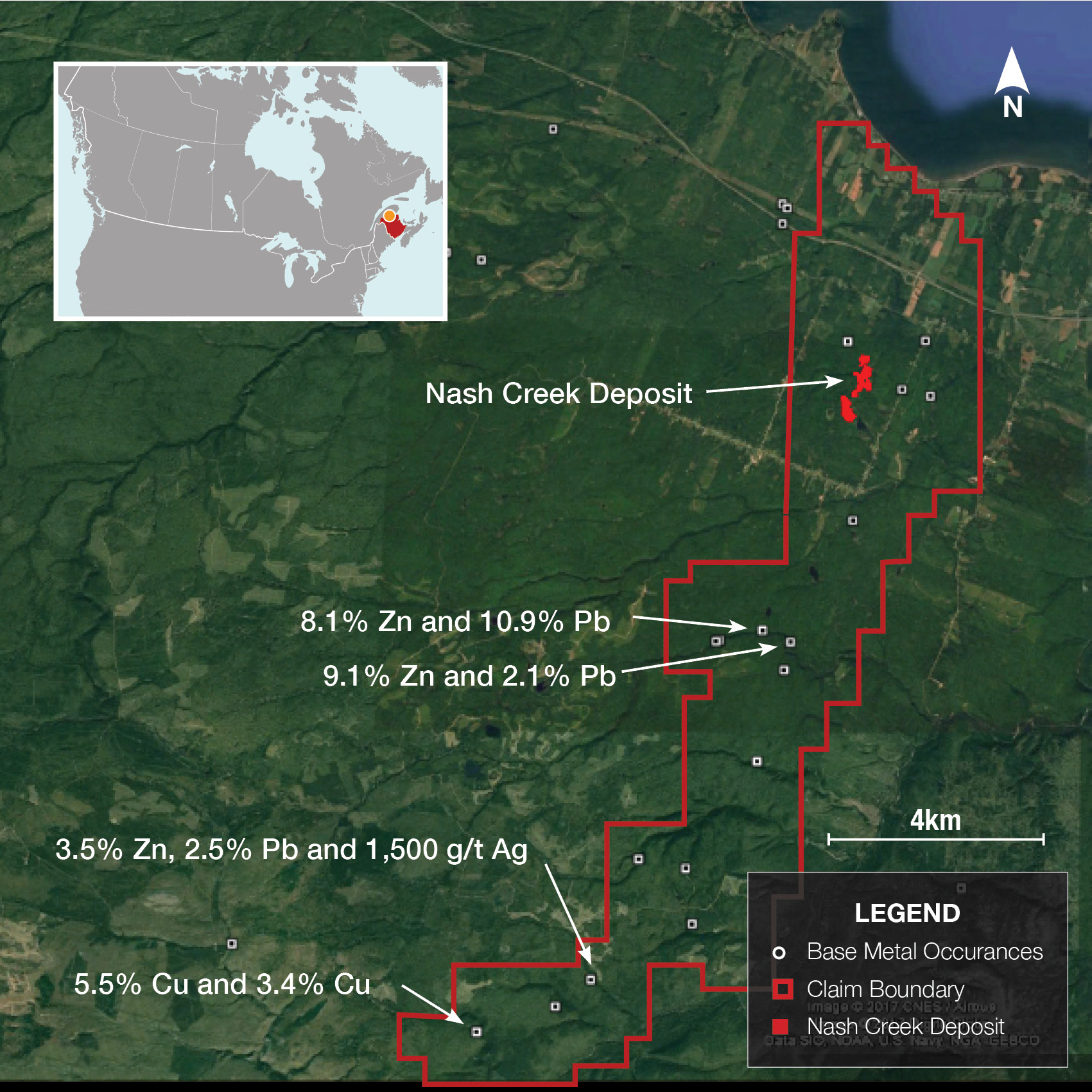 Callinex Mines Inc. (TSX-V: CNX ; OTCQX: CLLXF) is advancing its portfolio of zinc rich deposits located in established Canadian mining jurisdictions. The portfolio is highlighted by its Nash Creek and Superjack deposits in the Bathurst Mining District of New Brunswick. Callinex is actively drilling these projects in support of an updated resource estimate and maiden PEA planned for Q1 2018.

Additionally, Callinex is actively exploring its projects in the Flin Flon Mining District of Manitoba which notably includes its Pine Bay and Big Island Projects. These projects are located within 25 km to an operating processing facility that require additional ore within four years.