Vancouver, British Columbia – January 21, 2021 – Callinex Mines Inc. (the “Company” or “Callinex”) (TSXV: CNX) (OTC: CLLXF) is pleased to announce results from a 10 line km deep penetrating surface pulse electromagnetic survey (“SPEM”) (the “Survey”) completed in January 2021 and the remaining drill results from the 2020 exploration campaign to expand the Rainbow Discovery (the “Discovery” or “Rainbow”) at the 100% owned Pine Bay Project located in the Flin Flon Mining District of Manitoba (District Overview Map). The Rainbow Discovery has been made on Callinex’s mineral lease, less than 250m from a high-voltage power-line and 550m from a historic shaft with direct road access to processing facilities in Flin Flon, MB.

Mike Muzylowski, Founder of Callinex and 2011 inductee into the Canadian Mining Hall of Fame for the discovery and development of 13 mines in Manitoba, stated, “We acquired the Pine Bay Project because it encompasses one of the largest altered felsic volcanic rock packages that I’ve come across and with it the potential to host a significant deposit.” Mr. Muzylowski continued, “I believe, based on the high-grade mineralization intersected to date coupled with the targets outlined by our team today, that the Rainbow Discovery may become one of the more significant discoveries I’ve been a part of in my career exploring the Flin Flon Greenstone Belt.”

Jim Pickell, 2001 Bill Dennis Award recipient for his role is the discovery of the 777 Mine, commented, “All of the key geological, geophysical and geochemical features that you would ever hope to have for a substantial volcanogenic massive sulphide (“VMS”) system have now finally been gathered by the latest round of drilling and geophysical surveys. The potential and future looks quite bright at the western end of the rainbow, a rainbow-shaped highly prospective folded fault structure first noted in December 2015.”

Alan Vowles, 2009 Bill Dennis Award recipient for his role in the discovery of the Lalor Mine in Manitoba, stated, “The four anomalies directly south and along strike of the Rainbow Deposit are some of the best that I have seen. The extremely high conductivity of the anomalies match that of the Rainbow Deposit anomaly, which is due to the abundance of copper bearing chalcopyrite in the massive sulphides.” 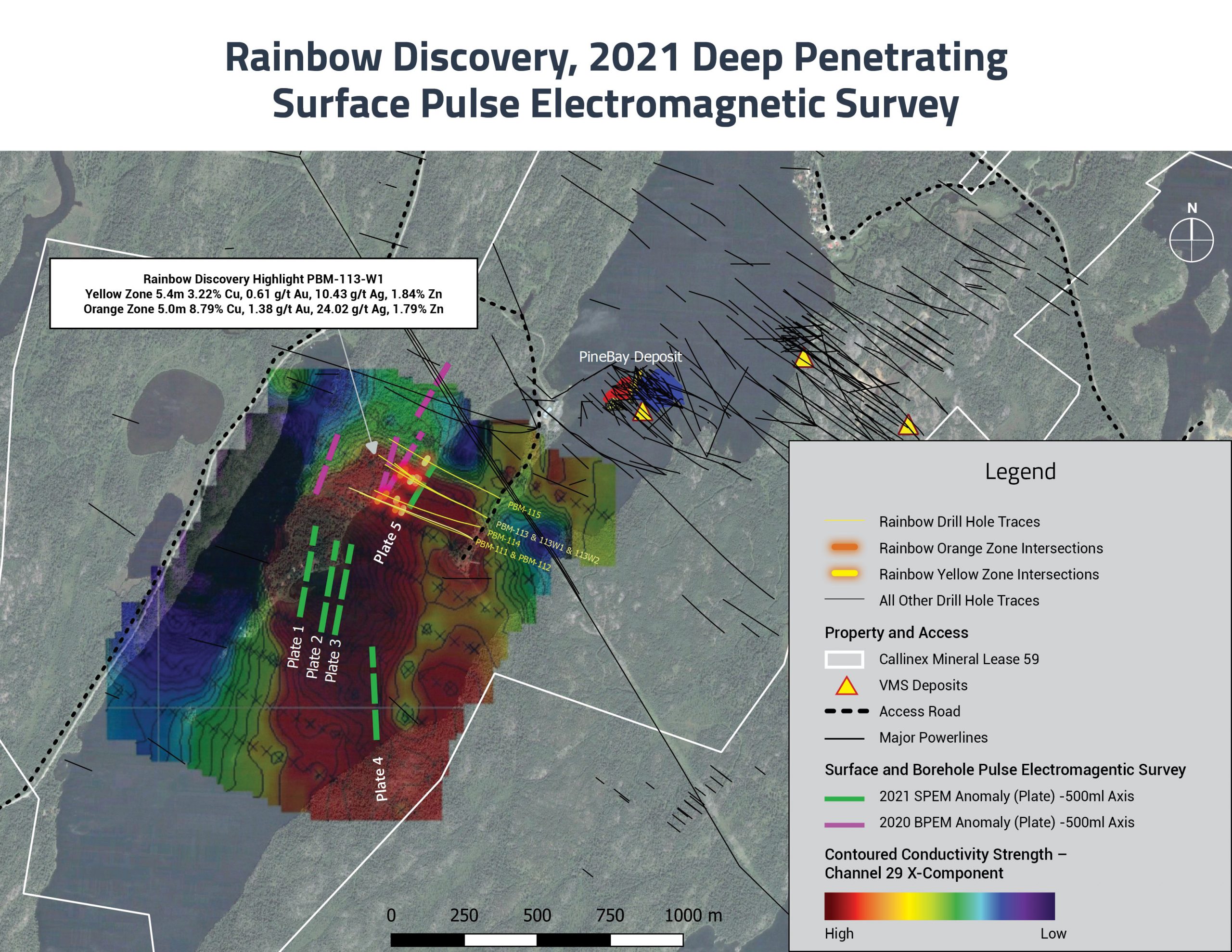 Each of the four modeled conductive anomalies (Anomalies 1-4) have a strike extent of 300 metres and are interpreted to begin at a vertical depth of 200 metres. While none of these plates have been tested by diamond drilling, some historical holes in the vicinity have intersected alteration and geology as seen in recent Rainbow zone drilling. Anomaly 5, which is the modeled conductive body of the Orange and Yellow zones, has a modeled strike extent of 150m, or half the length of Anomalies 1-4 (See Rainbow Discovery Long Section).  It should be noted that deposits in the Flin Flon Greenstone Belt typically have a plunge extent on average between 5-8 times the strike of the deposit. Additionally, all larger producing Volcanogenic Massive Sulphide (“VMS”) mines are made up of a number of stacked zones or lenses such as the Orange and Yellow zones discovered to date at the Rainbow.

The Survey was completed when Callinex’s technical team recognized the importance of the southern area based on known favorable geology, very limited drill testing and having never been covered by SPEM. The SPEM survey was initiated during the first week of January and consisted of 9 (~1km) survey lines spaced 150 metres apart. Initially Koop surveyed over the known Rainbow zones to see if it was possible to locate the known mineralization with their system (See Plate 5 on Rainbow Discovery Plan View) and after having success continued southerly with the survey. 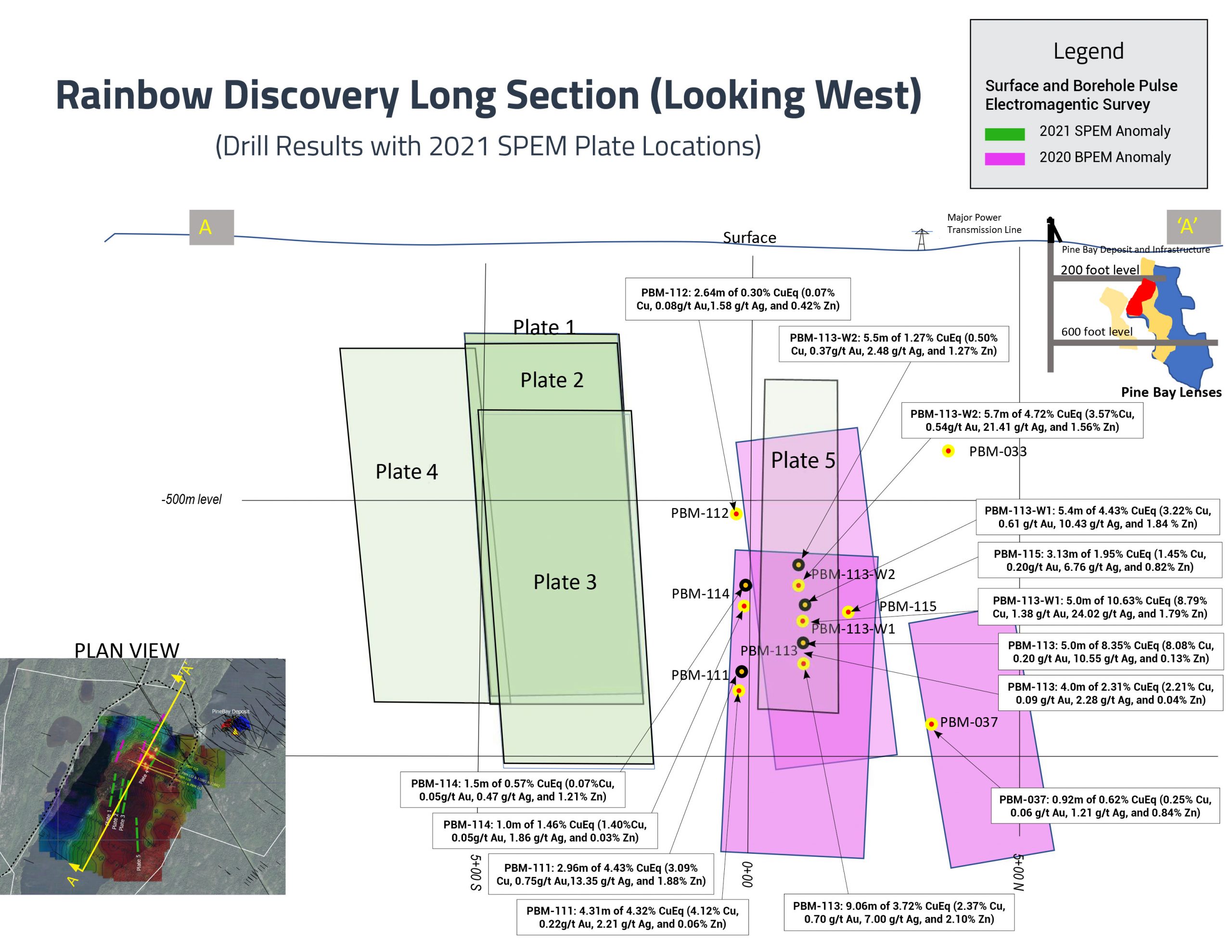 Drill Hole PBM-113-W2 intersected the Rainbow Horizon 225 metres vertically above the PBM-111 discovery hole which demonstrates that mineralization will continue to be defined closer to the surface. Correlation between its parent hole PBM-113 which is 100 metres vertically below PBM-113-W2 is supported by the intersection of the Orange Zone which returned 5.7m of 4.72% copper equivalent (CuEq) comprising of 3.57% copper, 0.54 g/t gold, 21.41 g/t silver and 1.56% zinc.

Plans are underway to immediately initiate a drilling campaign to test the four conductive bodies in tandem with continued drilling to define the Orange and Yellow zones.