The current mineral resource estimate is based on two of five known mineralized areas, the Hickey and Hayes deposits, where 220 holes totaling 26,835 meters have been drilled by previous operators at the Project since 2004 (See Figure 1). The mineral resources in the Hayes Zone are located within 250 meters from surface and in the Hickey Zone within 110 meters as numerous stacked and sub-horizontal, to gently inclined, tabular bodies. Additional mineralized areas adjacent to the north and east of these deposits are not included within the current resource estimate. Callinex’s technical team has also identified exploration potential to the south where the Hayes Zone may be open for expansion.

President and CEO, Max Porterfield, stated, “This latest accomplishment significantly enhances the potential viability of the Nash Creek Project. We believe this project has significant merit given the size of the near-surface resource, proximity to mining infrastructure and positive metallurgical results which have indicated that the average grade of material can be upgraded through a Dense Media Separation process.” Mr. Porterfield continued, “Projects such as Nash Creek, with high leverage to zinc prices within established mining jurisdictions, will benefit significantly in a rising zinc price environment.”

The Nash Creek Project is located within the Bathurst Mining Camp (“BMC”) and benefits from excellent infrastructure including a power-line, railway and major highway transecting or adjacent to the Project. Additionally, two processing facilities, a seaport and a lead smelter are located within 100 kilometers by road. The BMC has been one of the most productive and economically significant mining districts in the world. In total, more than 130 million tonnes of ore have been extracted from ten mines, nearly all of which has been mined since the 1950s.

A review of historical drilling concurrent with several geophysical anomalies suggests additional exploration has potential to significantly increase the current mineral resource estimate. In particular, the Central Zone which, lies 1.6 kilometers to the east of the Hayes and Hickey Zones, was discovered by drilling in 2005 and is coincident with a geochemical and airborne EM anomaly. There is a 1,000 meter wide gap which is mostly untested by historic drilling between the Central Zone and the existing mineral resources (See Figure 1).

The mineral resource estimate utilized metallurgical recoveries of 90.5% for zinc, 81.5% for lead and 50% for silver based on preliminary flotation studies. In 2011, four composite samples were submitted to RPC to evaluate potential for a pre-concentration process known as Dense Media Separation (“DMS”). DMS is a well-established process designed to concentrate sulphide mineralization and reject fine alteration clays thereby increasing the average head grade of material for mill processing.

The DMS results demonstrated significant upgrading potential ranging from a 40% to 173% increase in the average head grade of material with only an indicated loss of less than 10% of the contained sulphides (See Table 1).

The mineral resource estimate was prepared by Tetra Tech EBA Inc., with an effective date of August 23, 2016. A NI 43-101 technical report supporting the updated estimate will be filed by the Company within 45 days.

The Qualified Person under National Instrument 43-101 Standards of Disclosure for Mineral Projects for this news release is James Barr, P.Geo of Tetra Tech EBA Inc., who is independent of Callinex and has approved its contents. 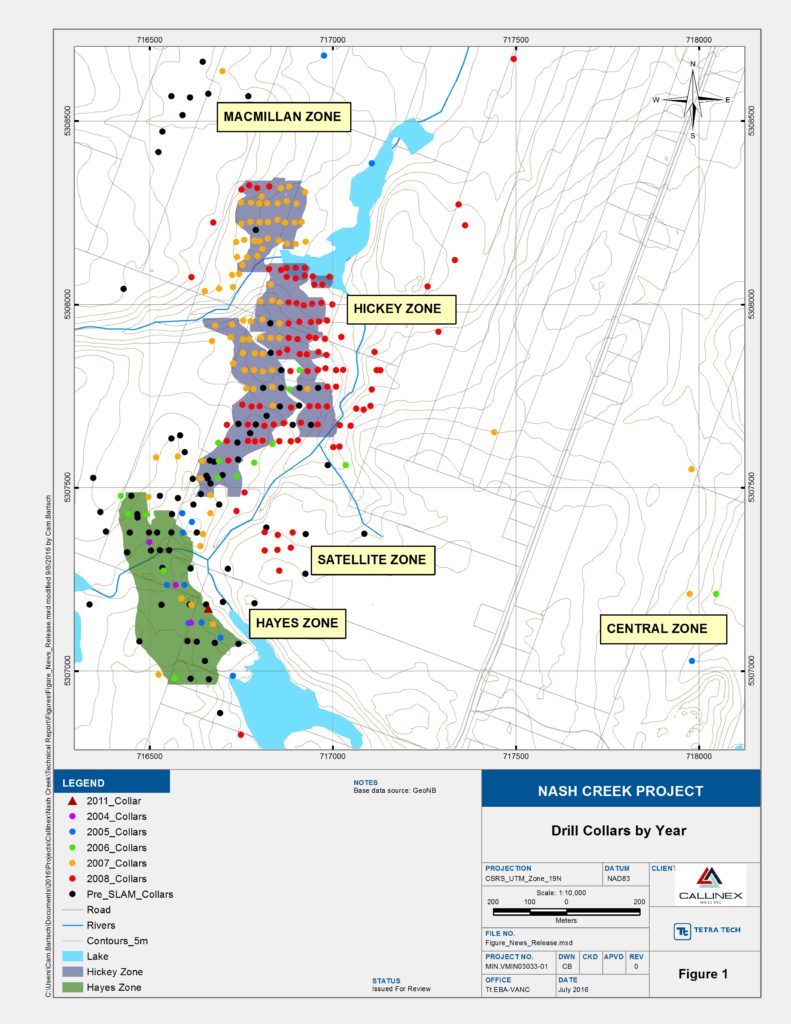