Vancouver, British Columbia – April 24, 2015 – Callinex Mines Inc. (the “Company” or “Callinex”) (TSX-V: CNX; OTCQX: CLLXF) is pleased to announce that it has completed Phase One of the previously announced two-phase 4,000m drilling campaign. A total of five holes were completed for 1,425m in the vicinity of the Pine Bay deposit. The drilling campaign was successful in intersecting high-grade copper mineralization along with verifying the Company’s recently compiled geological database. These results, combined with recently verified historic work, will be valuable in the expanded Phase Two drilling campaign to be conducted this summer.

The Phase One drilling campaign focused on confirming historic mineralization and testing targets in the immediate vicinity of the Pine Bay deposit. After the first four holes were completed the Company postponed drilling several high priority targets along the favorable Sourdough Trend. The decision to postpone further drilling was due to safety concerns over ice thickness in the Sourdough Bay area of Athapapuskow Lake. The successful confirmation holes and validated geological database will be instrumental in moving forward on plans to complete a NI 43-101 Technical Report and Resource Estimate at the Pine Bay Project.

Max Porterfield, President and CEO stated, “These results demonstrate that Pine Bay hosts high-grade mineralization over considerable widths in proximity to historic underground workings and nearby processing facilities. Our team now has confidence in our database to support a modern resource estimate, which is significant given that nearly all historic drilling was completed in the 1960s.” Mr. Porterfield continued, “We will be expanding Phase Two of our drilling campaign this summer and are looking forward to testing several high priority land-based targets.”

The expanded Phase Two drilling campaign will consist of approximately 10 holes totaling a minimum of 2,500m. The objective will be to test prospective land-based targets at the Pine Bay and Flin Flon projects. The geology of the targeted areas consists of several mineralized horizons that are similar to host rocks of the historic Flin Flon mine, where more than 60 million tonnes of ore have been mined. The Company is currently conducting ground geophysics to further evaluate the most prospective targets for drilling.

Discussion of Phase One Drilling Campaign

In advance of the first phase of drilling, which had the mandate to focus on lake-based targets at the Pine Bay Project, the Company completed significant work to mitigate risk and maximize opportunities. The Company’s technical team compiled and digitized historic data that included over 700 drill holes. In addition, over 50-line km of ground geophysics was completed based on interpretation of previously completed airborne geophysical surveys. This process identified the Pine Bay deposit as having potential for expansion and additional precious metal values. The work also identified the Sourdough Trend as an area with potential to host a new discovery. In particular, the Company identified targets along strike in both directions of the Sourdough deposit as having good potential for new discoveries.

The campaign commenced on targets in close proximity to the Pine Bay deposit with plans to move the rig to the Sourdough targets, located approximately 5km along strike to the south. A total of five holes were completed in the immediate vicinity of the Pine Bay Project before ice levels diminished. Due to ice conditions the drilling campaign was unable to test these targets; however, they remain a priority for future lake-based winter drilling. A discussion on each hole completed in Phase One is outlined below.

PBM001: Intersected copper mineralization near the southwestern edge of the Pine Bay deposit. The intercept includes 4.0m of 2.5% Cu Eq. including 1.2m of 3.8% Cu Eq. An additional narrow zone of copper and gold mineralization was encountered further down-hole.

The hole was also designed to follow-up on a potential gold zone located approximately 130m south of the Pine Bay deposit. Previous drilling, consisting of one hole, defined mineralization however no follow-up drilling had been completed despite assays that ended in increasing gold mineralization with the final 5.5m assayed at 5.1 g/t gold. This mineralization was originally reported in ounces per ton but has been converted to grams per tonne. Hole PBM001 intersected 3.0m of 0.9 g/t Au Eq. within a larger 9.2m interval of disseminated sulfides. It appears that drilling may have intercepted the periphery of the gold zone and that additional drilling is necessary to determine the overall grade and size of this zone.

PBM002: Drilled to test a magnetic anomaly with a similar signature to the Pine Bay deposit and test a weak electromagnetic conductor that plunged away from historic drilling. The Company also identified a historic hole that was plotted in this area that intersected high-grade zinc. The hole did not encounter any significant mineralization.

PBM003: Targeted a newly projected plunge of the Pine Bay deposit at depth. Data from a recently completed geophysical grid over the Pine Bay deposit indicated a northeastern trending plunge to the electromagnetic anomaly that correlated with historic drilling. The Company planned an aggressive step-out of approximately 200m along strike in order to maximize the radius of borehole geophysics to confirm the projected plunge.

When drilled, the hole deviated an additional 50m away from the planned target and did not encounter any significant copper mineralization; however, a borehole geophysical survey located an anomaly at depth towards the deposit. The Company believes this target indicates that there is good potential for additional mineralization along the projected plunge where the stratigraphy is also consistent with the Pine Bay deposit. Additional drilling is necessary to determine the significance of the potential mineralization.

PBM004: Drilled to test for potential stacked lenses behind the Pine Bay deposit while also providing confirmation drilling to validate the Company’s data compilation work. The hole intersected the primary deposit and encountered 44.2m of 4.0% Cu Eq. including a higher grade interval of 18.1m of 5.5% Cu Eq. The hole demonstrated significant thickness within the primary deposit and higher grades than historic drilling.

PBM005: Tested a land-based target located along the favorable Sourdough Trend and approximately 460m from the Pine Bay mine shaft. The target featured intense chloritic alteration at surface adjacent to mapped fragmental volcanic rocks and near known mineralization. The hole did not encounter any significant mineralization.

Significant Drill Results from Phase One 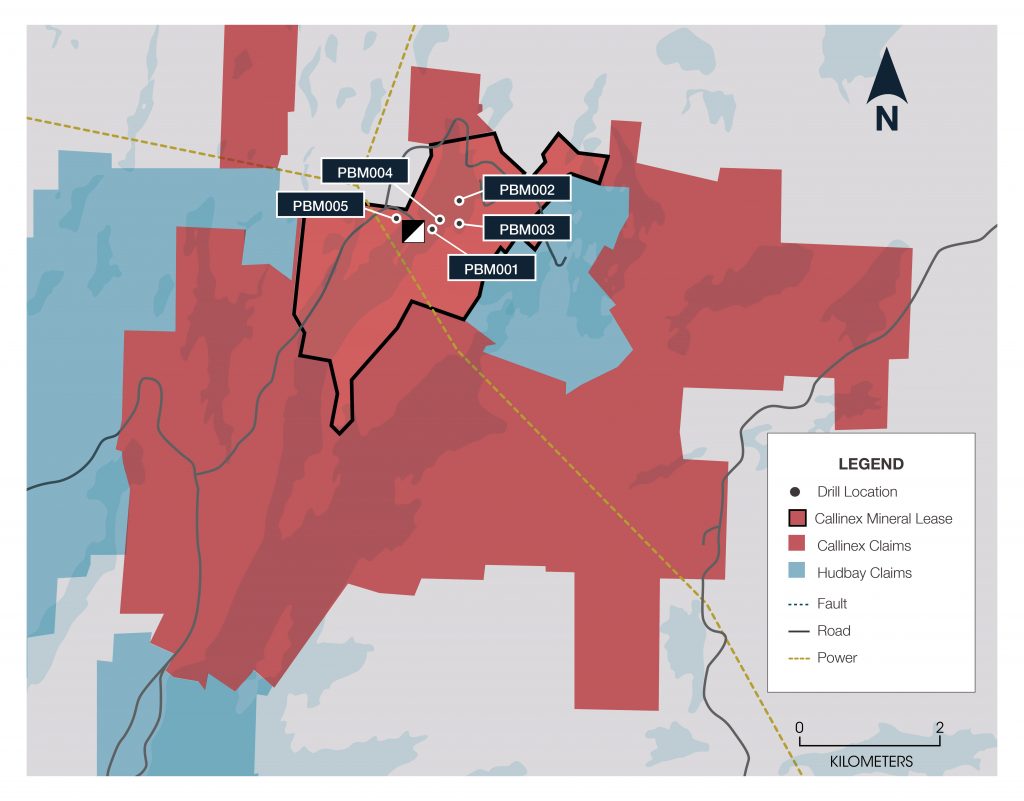 Individual samples were labeled, placed in plastic sample bags, and sealed. Groups of samples were then placed in security sealed bags and shipped directly to AcmeLabs in Vancouver, B.C. for analysis. Samples were crushed and pulverized to produce a 250g split. All samples were analyzed for gold by Fire Assay of a 30 gram (1 assay ton) charge by AAS, or if over 10.0 g/t were re-assayed and completed with a gravimetric finish. Ag, Cu, and Zn were determined by ICP-MS, with overlimits (>100 ppm Ag, >20,000 ppm Zn, and >10,000 ppm Cu) completed by fire assay with gravimetric finish (Ag) or 4-acid digestion with ICP-ES finish (Cu).  QA/QC included the insertion and continual monitoring of numerous standards and blanks into the sample stream at a frequency of 1 per 10 samples, and the collection of duplicate samples at random intervals within each batch at a frequency of 1 per 10 samples.