Vancouver, British Columbia – January 12, 2018 – Callinex Mines Inc. (the “Company” or “Callinex”) (TSX-V: CNX; OTCQX: CLLXF) is pleased to announce results from the 2017 summer drilling campaign (the “Campaign”) at the Pine Bay and Big Island Projects within the Flin Flon Mining District of Manitoba (See Figures 1,2 and 3). The Campaign consisted of ten holes totaling 5,350m of drilling to conduct a maiden program at the Company’s Big Island Project and follow-up on high-grade volcanogenic massive sulphide (“VMS”) mineralization at the Pine Bay Project.

The maiden drilling campaign at the Big Island Project, which hosts the high-grade Tara Lake Deposit, consisted of five holes totaling 1,480m to test the down-plunge potential, confirm the orientation of a fault reported to have displaced part of the deposit and test for lateral extensions of mineralization. This program confirmed that the fault is likely responsible for displacing a portion of the deposit along the projected plunge. Drill hole TZ17-03 tested for a possible fold nose closure and intersected 7.9m of 2.5% Zn and 0.42 g/t Au at a starting depth of 69.5m including 0.2m of 28% Zn, 1.9 g/t Au and 42.7 g/t Ag at a starting depth of 76.9m.

Significantly, multiple borehole surveys identified conductors down-plunge that represent potential for mineralization in a proximal setting. In particular, hole TZ17-02 which was drilled approximately 500m south along the projected plunge line, identified a untested borehole pulse electromagnetic conductor with a strike extent of 450m and a plunge extent of 675m, with a coincident magnetic signature indicative of massive sulphides (See Figure 4). This target will be tested as part of an upcoming 2018 drilling program and the results will assist the Company to determine whether to proceed further with the option agreement.

A follow-up drilling program at the Pine Bay Project was completed to test for continuity between drill holes 284-3-93-DPN that previously intersected 10.3m grading 13.1% Zn Eq. and drill hole PBM-024 located 180m along strike that intersected 2.6m of 3.0% Cu Eq. (See News Release dated May 1, 2017). Drill hole PBM-030 reached its intended target and intersected intense alteration with abundant pyrite mineralization before intersecting a post-mineralized intrusion (See Figure 5). There appears to be a significant dyke or sill that could limit the overall potential size of this zone.

The Pine Bay Project is located 16 km east of HudBay’s 777 Mine and processing facilities near Flin Flon, MB and covers a significant portion of the Baker Patton Felsic Complex, one of the largest and most highly altered packages of felsic volcanic rocks within the Flin Flon Greenstone Belt.

Jason Levers, P.Geo, a qualified person under National Instrument 43-101 and Project Geologist for Callinex, has reviewed and approved the technical information in this news release. 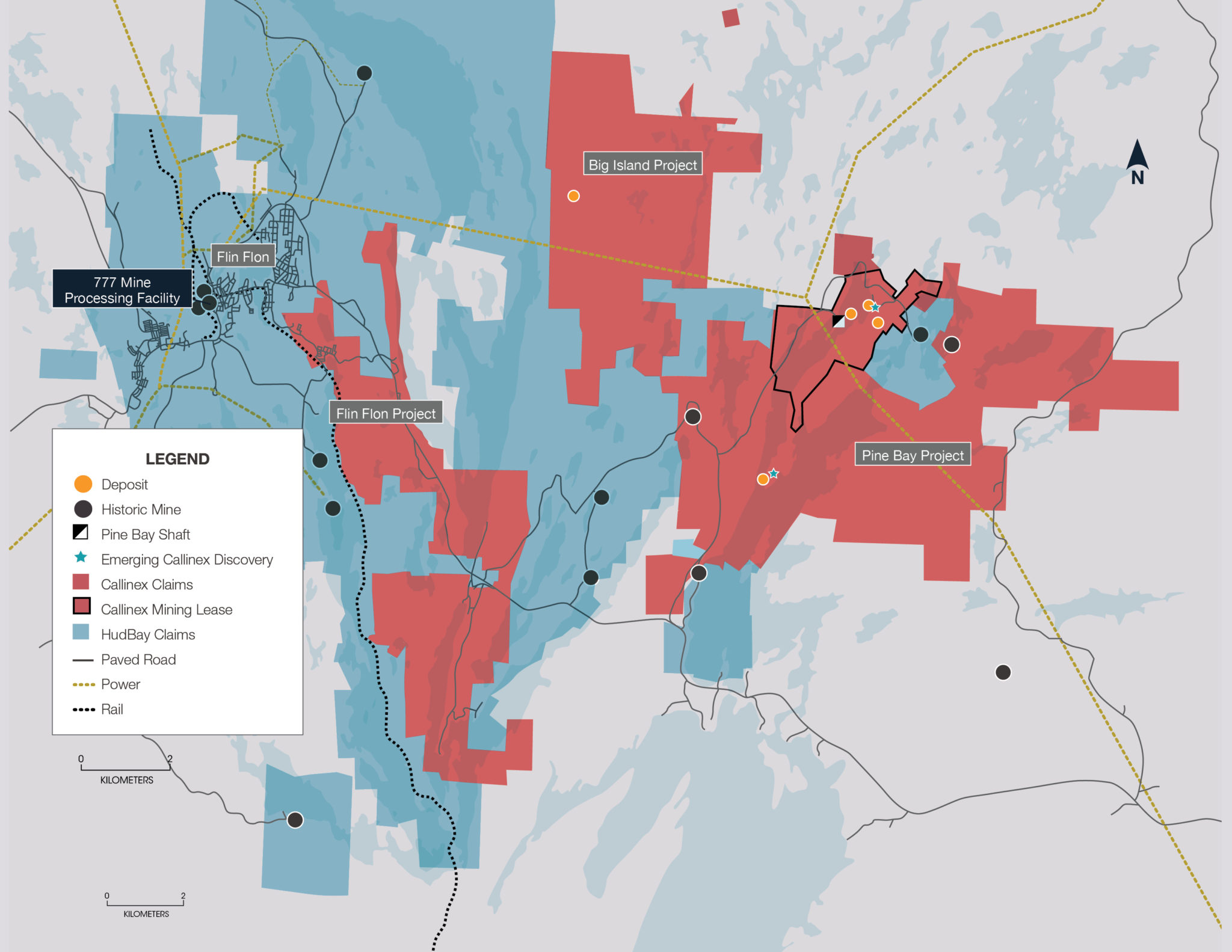 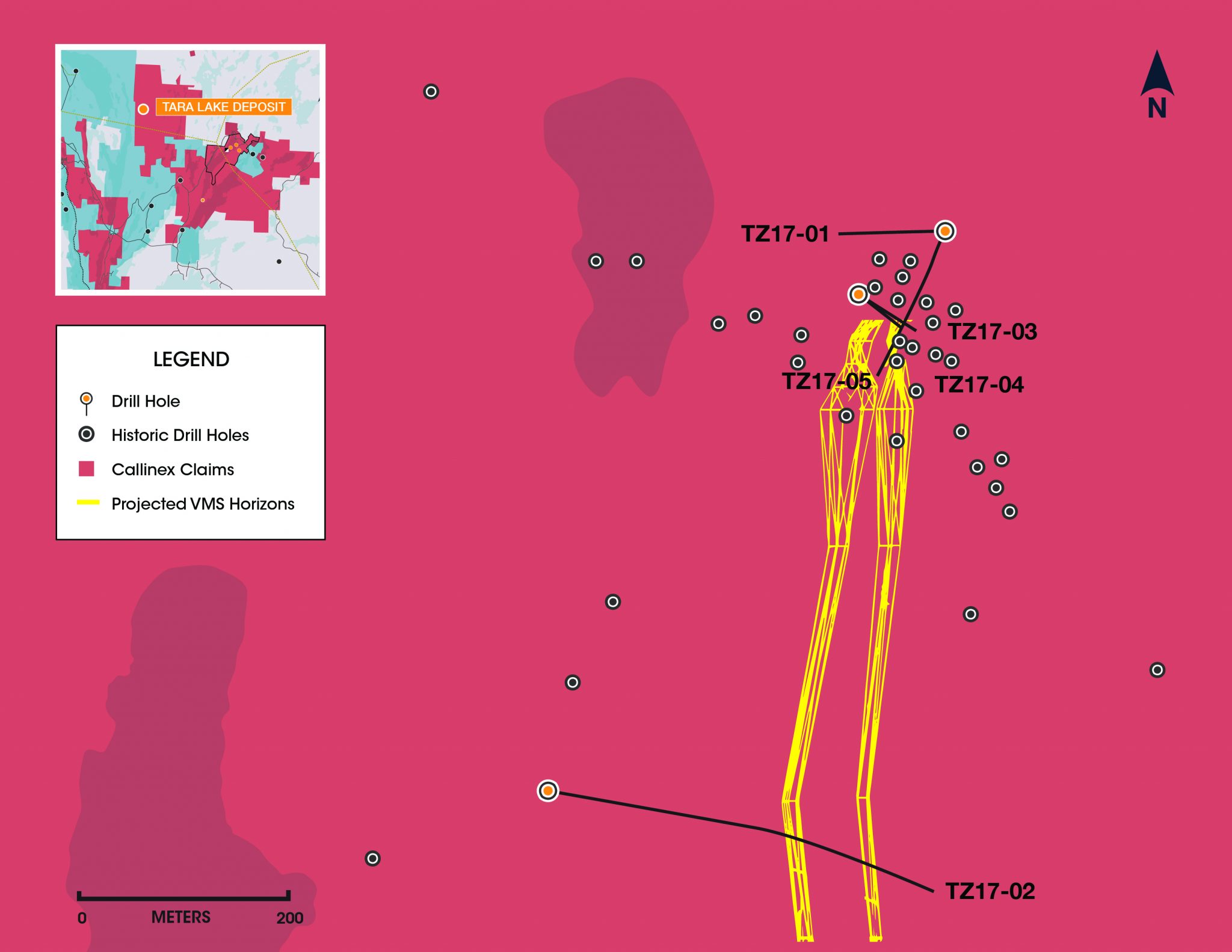 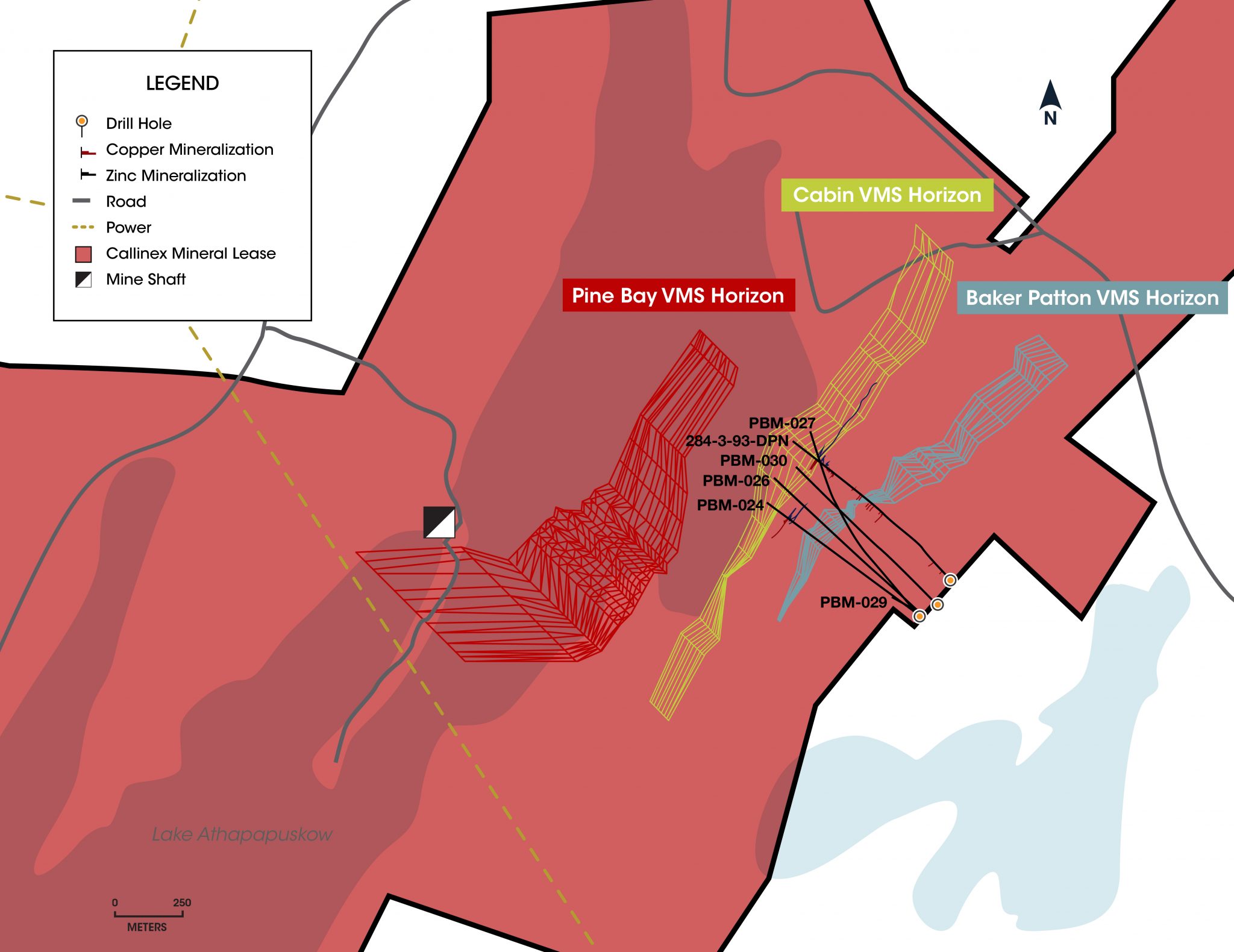 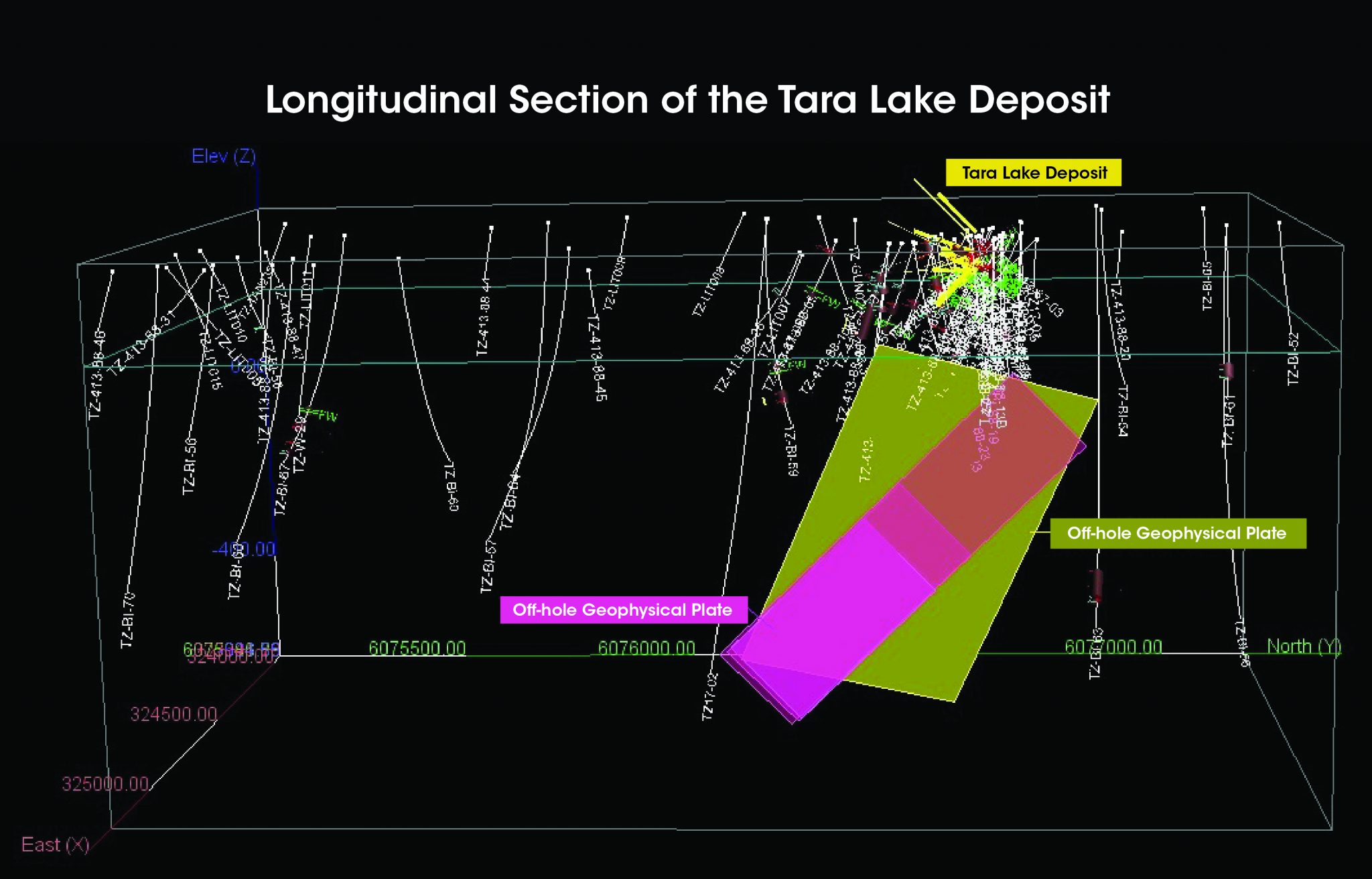 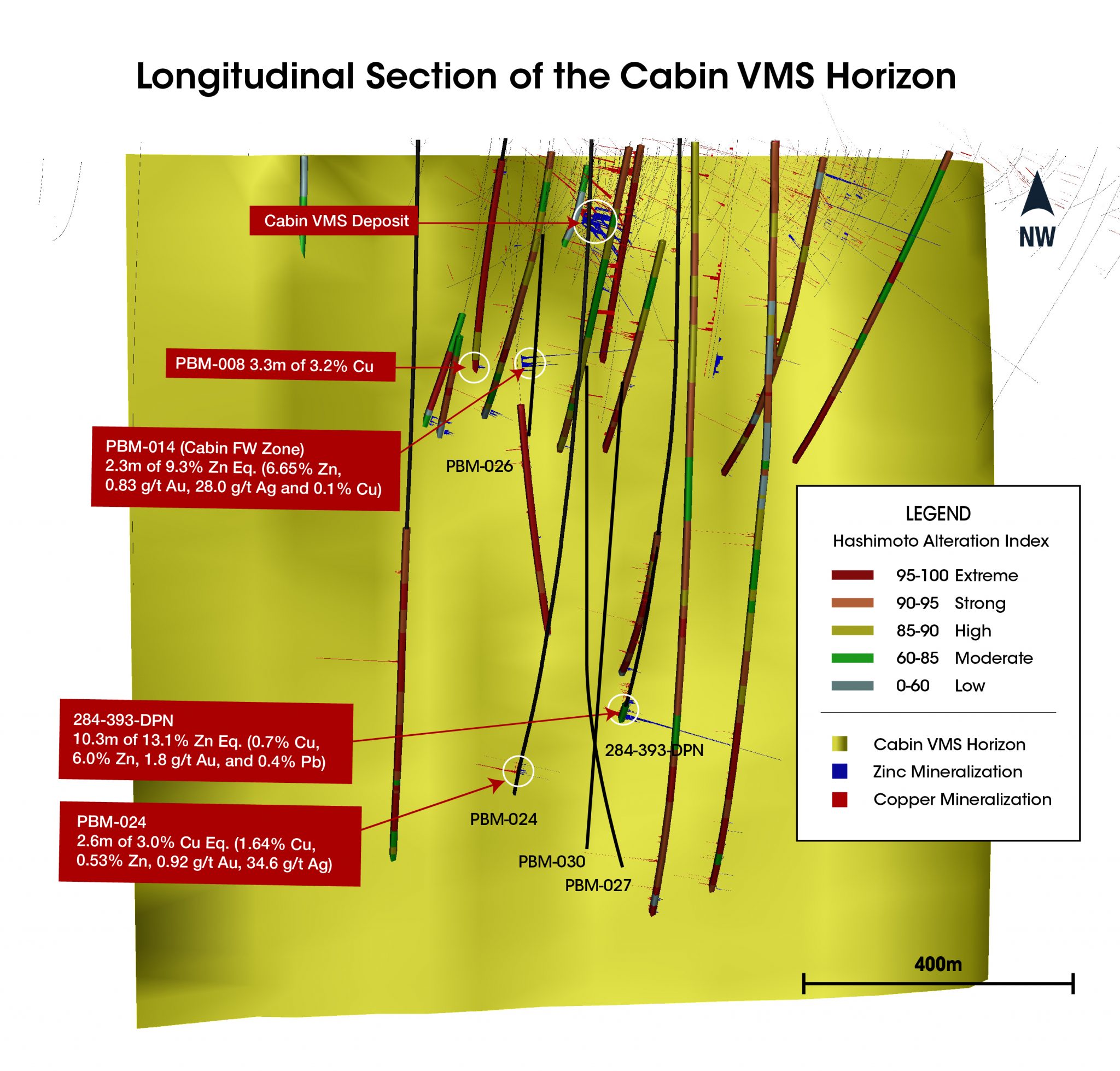 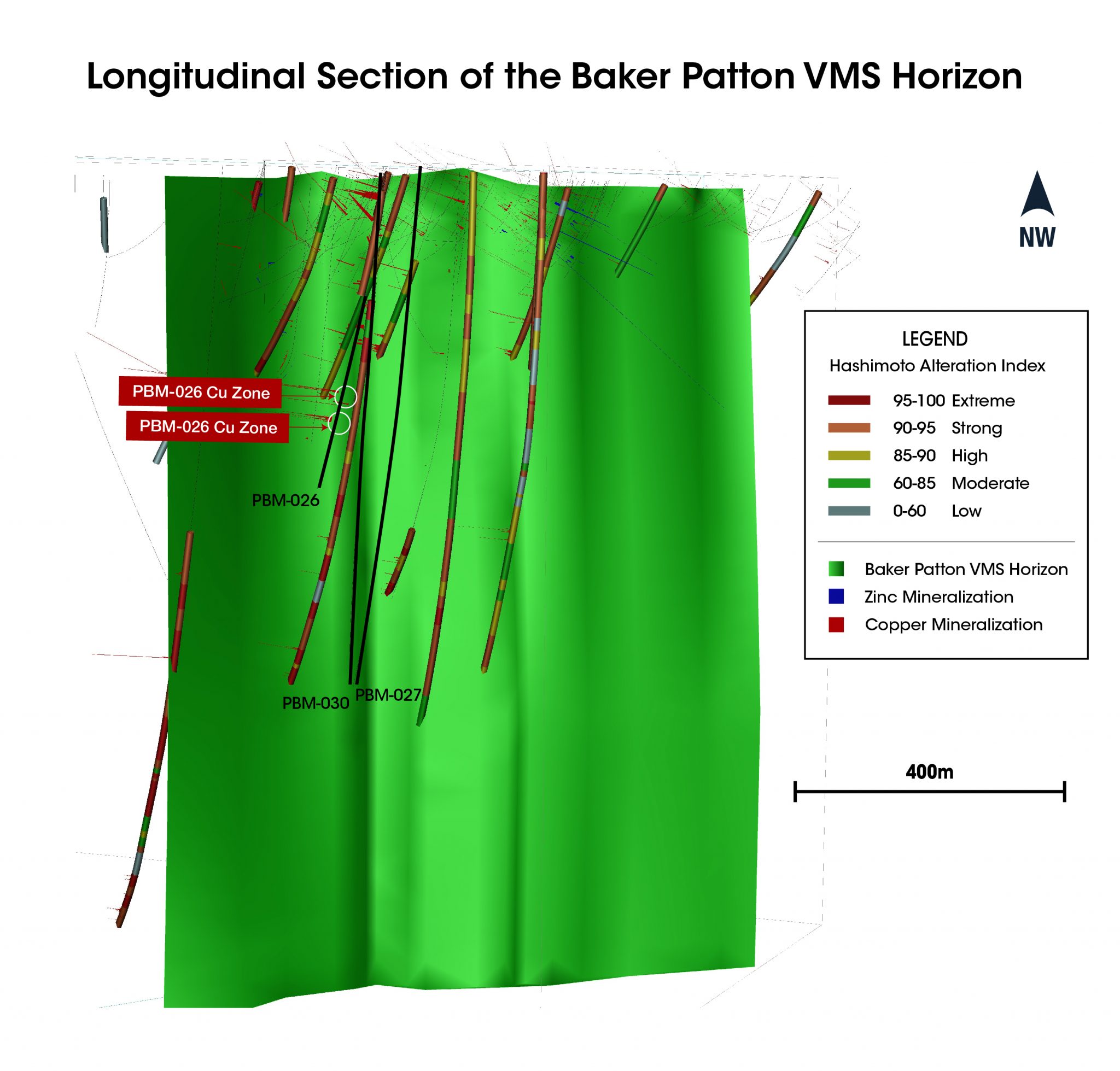 Individual samples were labeled, placed in plastic sample bags, and sealed. Groups of samples were then placed in security sealed bags and shipped directly to SGS Canada Inc in Vancouver, B.C. for analysis. Samples were crushed to 75% passing 2mm and pulverized to 85% passing 75 microns in order produce a 250g split. All copper, zinc and silver assays were determined by Aqua Regia digestion with a combination of ICP-MS and ICP-AES finish, with overlimits (>100 ppm Ag, >10,000 ppm Zn, and >10,000 ppm Cu) completed by fire assay with gravimetric finish (Ag) or Aqua Regia digestion with ICP-AES finish (copper and zinc). All samples were analyzed for gold by Fire Assay of a 30 gram charge by AAS, or if over 10.0 g/t were re-assayed and completed with a gravimetric finish. QA/QC included the insertion and continual monitoring of numerous standards and blanks into the sample stream at a frequency of 1 per 10 samples, and the collection of duplicate samples at random intervals within each batch at a frequency of 1 per 10 samples.

Callinex Mines Inc. (TSX-V: CNX ; OTCQX: CLLXF) is advancing its portfolio of zinc rich deposits located in established Canadian mining jurisdictions. The portfolio is highlighted by its Nash Creek and Superjack deposits in the Bathurst Mining District of New Brunswick. Callinex is actively drilling these projects in support of an updated resource estimate and maiden PEA planned for Q2 2018.

Additionally, Callinex is actively exploring its projects in the Flin Flon Mining District of Manitoba which notably include the Pine Bay and Big Island Projects. These projects are located within 25 km to an operating processing facility that requires additional ore within four years.