Historic deposits open for expansion and potential within projects for discovery of additional deposits;
Recent compilation work has identified gold potential within the Pine Bay copper deposit;
Historic hole 19 intersected 13.1m of 3.93 g/t gold within the southern portion of the deposit that remains open for copper and gold expansion.
Sourdough area of Pine Bay Project is considered highly prospective; and
75-line km ground geophysical program underway to comprehensively evaluate high-priority areas in support of 2015 drilling campaign.
Vancouver, British Columbia – February 10, 2015 – Callinex Mines Inc. (the “Company” or “Callinex”) (TSX-V: CNX; OTCQX: CLLXF) is pleased to provide an overview on its exploration targets in advance of phase one of the 4,000m two-phase diamond drilling campaign at its Pine Bay and Flin Flon projects. The Company has identified three high-priority target areas, two at the Pine Bay Project and one at the Flin Flon Project. The Company has compiled historic data from more than 400 drill holes and a 75-line km ground geophysical program is underway to assist in identifying, evaluating and prioritizing targets. Drilling is scheduled to commence initially at the Pine Bay deposit where there is potential to expand gold and copper mineralization.

Max Porterfield, President and CEO, stated, “Our comprehensive approach to evaluating these projects is providing early dividends. We are excited to have identified potential for significant gold mineralization at the Pine Bay copper deposit given that less than 5% of historic meters drilled were assayed for gold.”

Mr. Porterfield continued, “In addition, our geological team has identified two other high priority areas that are considered significantly underexplored with potential for new discoveries. We look forward to actively exploring our Pine Bay and Flin Flon projects in a prolific geologic belt and in close proximity to Hudbay’s current mining operations.”

The Pine Bay and Flin Flon projects are located in the Flin Flon Greenstone Belt, one of the world’s largest VMS districts with 32 mines that have produced over 145 million tonnes of ore. Both projects are part of recently consolidated land packages and have not been subjected to significant modern exploration. Recently, technological advances in geophysics have spurred new discoveries including the Lalor and Reed Lake mines which are all currently in production and operated by Hudbay.

Recent compilation work has identified potential for additional metal values, such as gold and zinc, within and adjacent to the Pine Bay deposit. The deposit is historically reported as containing only copper with no gold or zinc values; however, historic drilling intersected zinc up to 3% and gold including hole 19 that intersected 13.1m of 3.93 g/t gold from a down-hole depth of 31 meters(1). Only a limited portion of hole 19 was assayed and as a result the assays began in gold mineralization and ended in mineralization despite increasing gold grades with the final 5.5m assayed at 5.08 g/t gold(1). Overall, less than 5% of total meters drilled have been assayed for gold and zinc. A gold and zinc credit has the potential to have an impact on the copper equivalent grade of mineralization. The geological model for VMS deposits hosted in rocks, such as Pine Bay, typically has a zinc to copper ratio of 3:1, suggesting there may be potential for additional zinc mineralization.

The Pine Bay deposit, which consists of four stacked lenses, is open to expansion to the southwest, northeast and at depth based on historic drilling (See Figure 1). The Company has also identified a nearby target area with potential for deeper mineralization and is currently conducting ground geophysics to further confirm geophysical and geological targets.

The geophysical grid covers an area of historic drilling that encountered 210m of alteration with 50m of chloritic alteration at depth that has not been followed up on. Nearly all VMS deposits in the Flin Flon Greenstone Belt are immediately related to a chloritic alteration zone and the extent of which typically has a correlation to the deposit size.

The Sourdough deposit is located in-between a series of geological and geophysical targets. The Company recently acquired the Bay 1 mining claim (see news release dated January 8, 2015) based on a preliminary finding of this data combined with its close proximity to the past producing Centennial Mine shaft. Mineralization in this area is prospective for precious metals such as gold and silver in addition to copper and zinc. A large ground geophysical grid is currently underway to confirm current targets and identify additional targets.

Untested Targets Near Hudbay’s 777 and Historic Flin Flon Mine

The Company has identified more than five drill targets based on modern geophysics that have potential to host mineralization over a significant area in close proximity to Hudbay’s current 777 mine operations. The overall geology of the target area is similar to the host rocks of the historic Flin Flon mine, where more than 60 million tonnes of ore have been mined, and consists of several mineralized horizons. Most targets are anticipated to be accessible from land-based drilling and ground geophysics is planned to further evaluate the most prospective areas for future drilling. 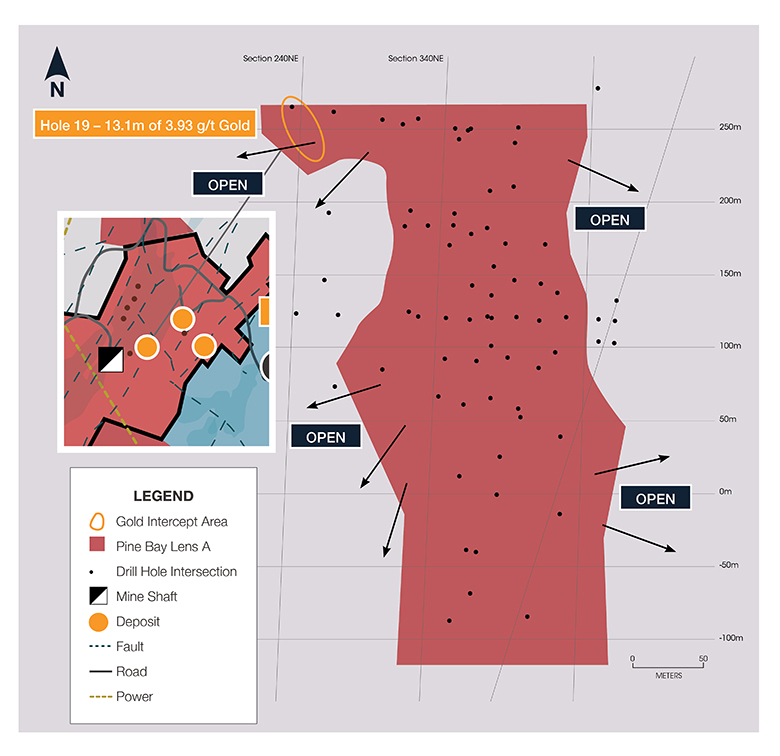 The Pine Bay Project is located 16km east of Flin Flon, MB, and covers approximately 4,500ha. The project includes a mineral lease that allows for the right to operate a mine and covers a 212m vertical shaft with 760m of underground development accessing high-grade copper mineralization. Significantly, a favorable geological trend with coincident geophysical anomalies extends for at least 8 km in a north-south direction and hosts Hudbay’s Centennial Mine along with Callinex’s Sourdough and Pine Bay deposits. Previous operators reported historic resources totaling 1.62 million tons at a grade of 2.81% Cu Eq.(2). Callinex has not done sufficient work to classify the historical estimate as a current mineral resource, and is not treating the historical estimate as a current mineral resource.

The project area was recently consolidated with individual claim blocks previously owned or operated by Placer Dome, Newmont, Hudbay and Cameco. In the 1990’s, the northern section of the property was primarily explored by Placer Dome, who conceptualized potential for a large VMS deposit at depth near the Pine Bay, Cabin and Baker Patton deposits. The Baker Patton deposit, which may represent a feeder zone, is located within a large and intensely altered zone up to 1,500m long and up to 740m wide. This alteration zone overlies a 540m x 360m stringer zone, a large gravity anomaly and both electromagnetic (EM) and magnetic anomalies.

(1) Values have been converted from the imperial to metric system

Information set forth in this news release contains forward-looking statements that are based on assumptions as of the date of this news release. These statements reflect management’s current estimates, beliefs, intentions and expectations. They are not guarantees of future performance. Callinex cautions that all forward looking statements are inherently uncertain and that actual performance may be affected by a number of material factors, many of which are beyond Callinex’s control. Such factors include, among other things: risks and uncertainties relating to Callinex’s ability to implement its drill program on its mineral properties, limited operating history and the need to comply with environmental and governmental regulations. Accordingly, actual and future events, conditions and results may differ materially from the estimates, beliefs, intentions and expectations expressed or implied in the forward looking information. Except as required under applicable securities legislation, Callinex undertakes no obligation to publicly update or revise forward-looking information.