Vancouver, British Columbia – June 28, 2021 – Callinex Mines Inc. (the “Company” or “Callinex”) (TSXV: CNX) (OTC: CLLXF) is pleased to announce that personnel and a drill rig are being mobilized to commence an up to 4,000m drilling campaign to drill test 10 km of the 18 km Black Point Arleau Brook Fault (the “Fault”). The drilling campaign will focus on key drill targets identified during the 2020 soil sampling campaign at the 100% owned Nash Creek Project (the “Project”) located within the Bathurst Mining District of New Brunswick (See Figure 1).

Max Porterfield, President and CEO, stated, “We are excited to commence drilling at the Nash Creek Project as we focus on expanding upon the two silver discoveries made last year.” Mr. Porterfield continued, “The focus of this drilling campaign is to test for silver mineralization along the 10km trend. If successful, this would put the company on a path to begin building a near surface silver resource at Nash Creek and with it the potential to further improve upon the maiden Preliminary Economic Assessment (“PEA”) that was published on the Bathurst Portfolio in 2018.” 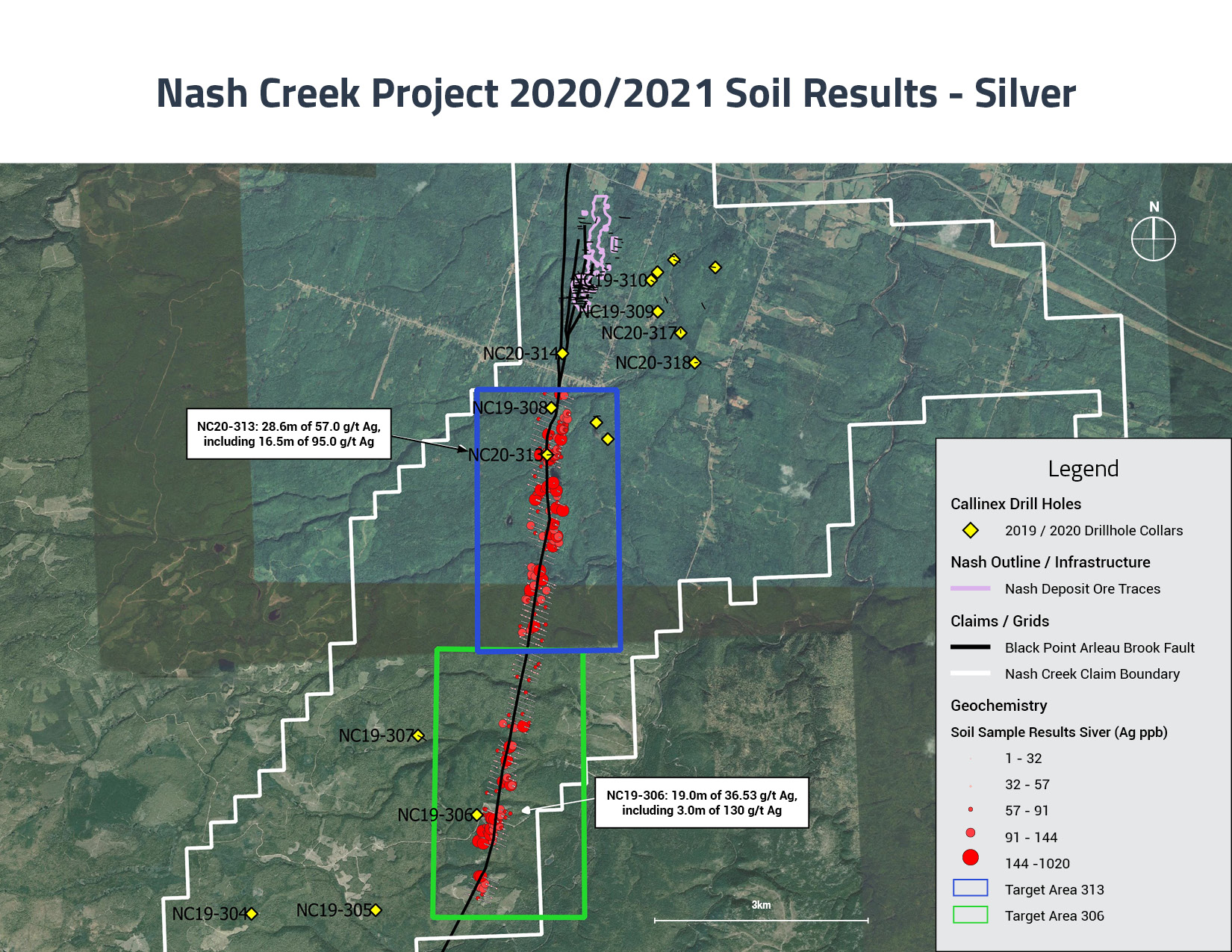 The 10 km area of interest has been subdivided into two target areas:

Target Area 313 is the northern 5.0 km of the sampled area where NC20-313 was drilled. Of the potential 5.0 km of strike, 3.7 km show strong linear correlations between silver/lead soil anomalies which supports the mineralization intersected in NC20-313 (See Figure 3).  Additionally, this target area is associated with a low resistivity Induced Polarization (“IP”) anomaly which suggests alteration similar to what was observed in NC20-313 (See Figure 4). The elevated soil anomalies and IP resistivity low coincide with the interpreted conductive airborne Versatile Time Domain Electromagnetic (VTEM) anomalies previously identified which could suggest an increase in silver rich sulphide mineralization similar to what was intersected in hole NC20-313. 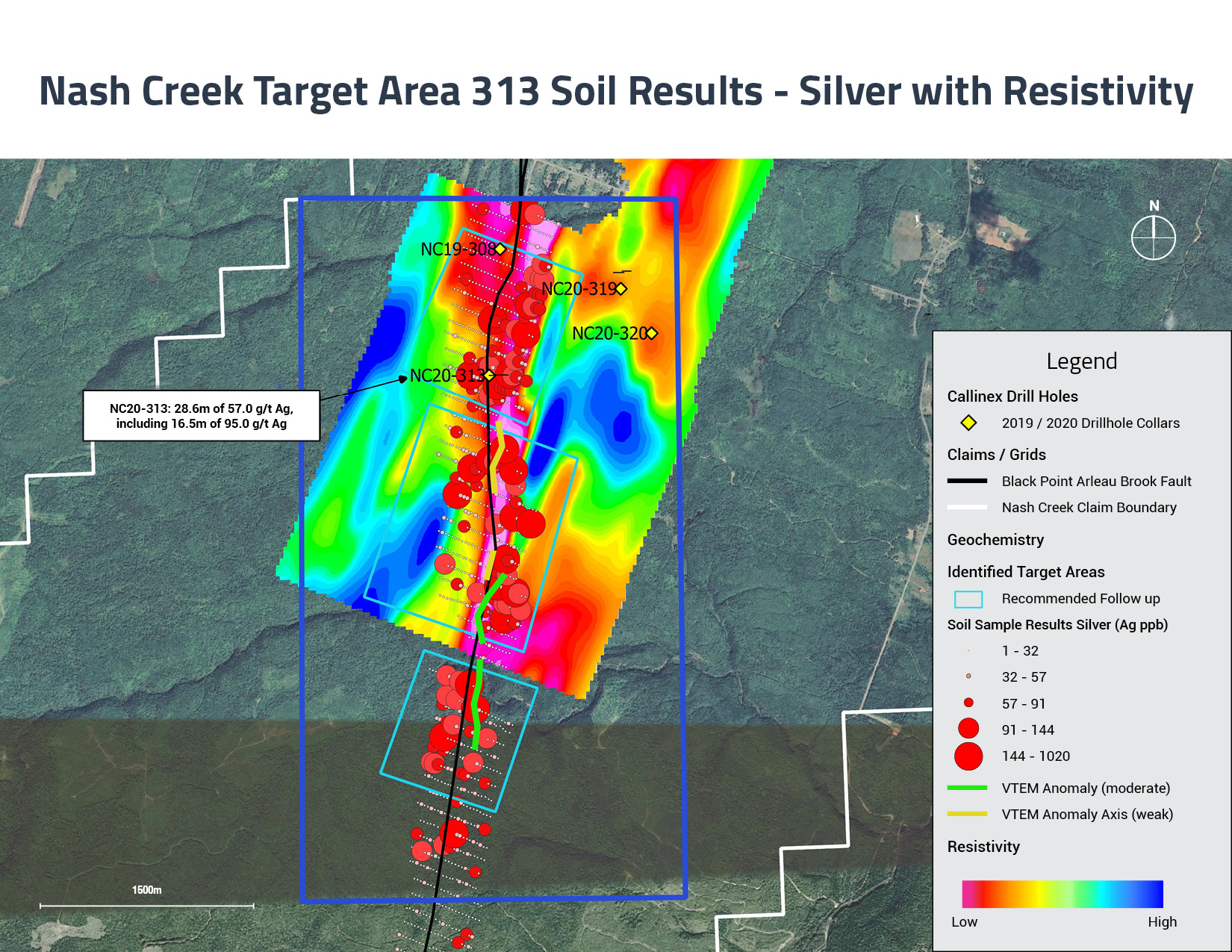 This target area is the southern 5 km of the sampled area where NC19-306 was drilled. As seen in the northern area, soil results in the southern portion define four targets recommended for drilling which span 1.7 km of prospective strike. Of particular interest from the soil sampling results are highlighted by anomalous silver along the Fault (See Figure 5). The elevated silver anomalies are coincident with a much larger IP resistivity low anomaly and sits along a felsic/sediment rock contact (See Figure 6). Drill hole NC19-306 was drilled vertically and did not test the main controlling fault. It should be noted that the 2006 VTEM survey that was completed was limited to a small portion of Target Area 313 and did not cover any of Target Area 306. 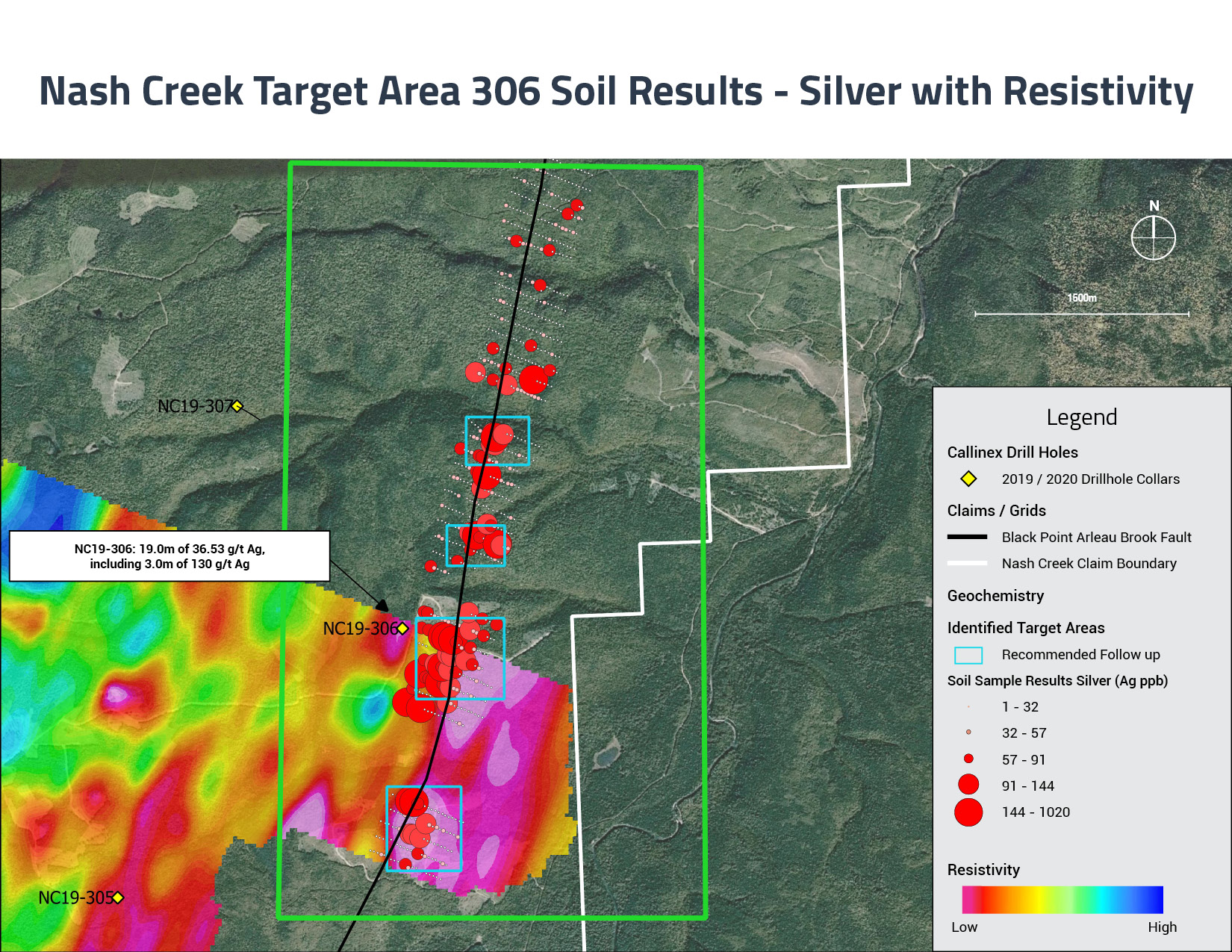 The silver mineralization defined by the two discovery holes is interpreted to be hosted within faulted / brecciated rhyolites, with alteration consisting of silica, pyrite, galena +/- calcite interstitial to the felsic fragments. Mineralization associated with faulting and the extensive soil anomalies defined along the Fault highlights the potential for additional silver mineralization to be discovered along the 10km trend.

Callinex is well funded to carry out the 4,000 metre drill campaign at Nash Creek and continues to carry out extensive drilling at the recently discovered Rainbow Deposit at the Pine Bay Project, Manitoba.